What other substance makes people so greedy and barbarous that they often kill for it?  Only meth can  inspire so much, but meth use has gone way down.  Marijuana, or cannabis, inspires a cult-like  following, with some advocates worshiping the plant as a god.  Several recent incidents back up the scholarly research on marijuana’s deleterious effects on the teen brain, promoting violent behavior and even murder. END_OF_DOCUMENT_TOKEN_TO_BE_REPLACED 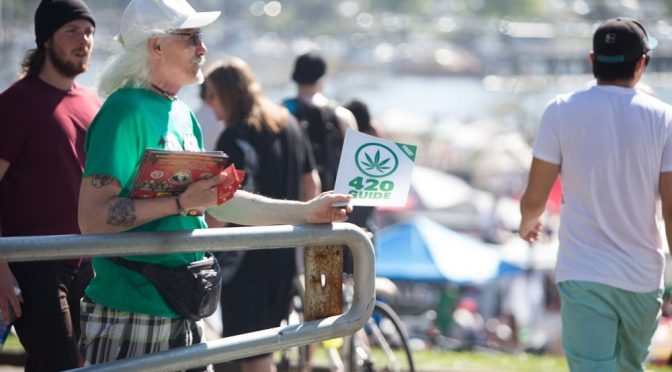 The annual marijuana protest at Sunset Beach this year left an adjacent field in ruins. It will be fenced off and closed to the public for up to a month while park board staff restore it. Park board officials said much of the damage could have been prevented if organizers had installed a turf protector as they had promised.
(Photos and videos of the trashed park after the 420 fiasco in Sunset Part available on this link.)

The event also led to 66 visits to St. Paul’s emergency department. Of these patients, 10 were under the age of 20. The youngest was 14.  Patients mostly had consumed edibles that brought on complaints of nausea, vomiting and dizziness.  An additional 25 people were seen at satellite first aid stations set up to ease the burden on St. Paul’s, while 62 people were seen at a first aid station that 4/20 organizers set up.
There were eight driving suspensions issued for the consumption of drugs, and two drivers were criminally charged with impaired driving.   The event, which drew an estimated 40,000, disrupted traffic, while the smoke, noise and crowds made life unpleasant for residents.
The cost of police, paramedics and park board staff assigned to the event, along with the cost of cleanup and field restoration will amount to thousands of dollars, with the financial burden falling largely on Vancouver taxpayers.
Yet Vancouver’s mayor and council ignore these negative effects, police refuse to enforce the law — selling and consuming cannabis without a medical prescription is still illegal — and pot proponents vow their protest will continue in defiance of city bylaws or any other restrictions, even after the recreational use of marijuana is likely to be legalized in July 2018. That’s because cannabis advocates say they didn’t get everything they wanted — they object, for example, to restrictions on selling drugs to minors.

Fortunately, the end is nigh for this kind of anarchic drug fest. Cannabis has become big business. Among the larger players in the Canadian industry, Canopy Growth of Smiths Falls, Ont., trades on the Toronto Stock Exchange and has a market capitalization in excess of $1.5 billion. Vancouver’s Aurora Cannabis is not far behind with a market cap of $841 million. It’s only a matter of time before big tobacco companies and major retailers squeeze out the illegal pop-up dispensaries and turn cannabis into a properly regulated industry.
In the meantime, the city should impose a financial penalty on 4/20 organizers and recoup as much of the cost of the event as possible.

Neighbors generally object to this event held in Sunset Park.

A man who brutally chased a woman with fire tongs and broke her jaw in Prescott, AZ, was a medical marijuana cardholder.  It doesn’t take a rocket scientist to know that marijuana legalization will increase domestic violence and violence against women and children.  We have written on this subject previously.

Near Portland, Oregon, a mother shot her 17-year-old son on Sept. 24.  Diane Davidoff’s paranoia and other mental illness, certainly made worse by frequent marijuana usage, probably led to the killing of her son.  She worried that others were out to get her. END_OF_DOCUMENT_TOKEN_TO_BE_REPLACED

On June 10, a driver in Ferndale, near Bellingham, struck and killed two Windward High School students on the sidewalk END_OF_DOCUMENT_TOKEN_TO_BE_REPLACED