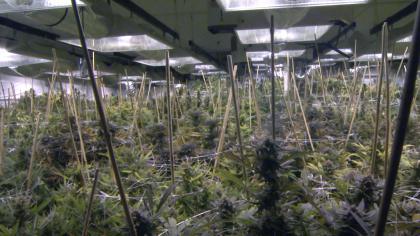 The “greenest” thing about marijuana is its color.   Mother Jones published an article highly critical of the marijuana growing back in 2014.  The story is told vividly in these pictures and charts.

Marijuana is very bad for the environment, and it’s time we wake up to how much it contributes to major droughts and climate change.   Some of the large fires in the West, including the Spring Creek Fire in Colorado, the Cedar Fire  and the Soberanes Fire in California have been traced to marijuana growers.

In California, the growers 1) divert water and worsen drought conditions;  2) use banned pesticides which also harm the water supply; 3) threaten the salmon supply, as explained in the Oregonian, and  4) threaten other species with the use of life-threatening  rat poison.

Marijuana grows in Colorado include many indoor warehouses outside of Denver which include round-the-clock lighting and climate control.  It puts a tremendous drain on the electric grid, as . this article explains.  Another article describes how much electricity it really takes to grow in the warehouses outside of Denver, using round-the-clock lighting and climate control.

Few people realize how the growers have modified the plant and cross bred it over the last 30 years.  This process has intensified recently.  This process is not evolution.  Instead there has been an aggressive attempt to bring out more THC, and the marijuana of today is up to 10x stronger than it was in the 1980s.

The “greenest” thing about marijuana is its color.   Mother Jones has an article highly critical of the marijuana growers.  The story is told vividly in these pictures and charts.

A View into Legalized Marijuana 20 Years from Now gives a fuller picture of past and present damage in the Emerald Triangle of California.   The website, A Silent Poison, provides more information about the environmental damage of marijuana growing.