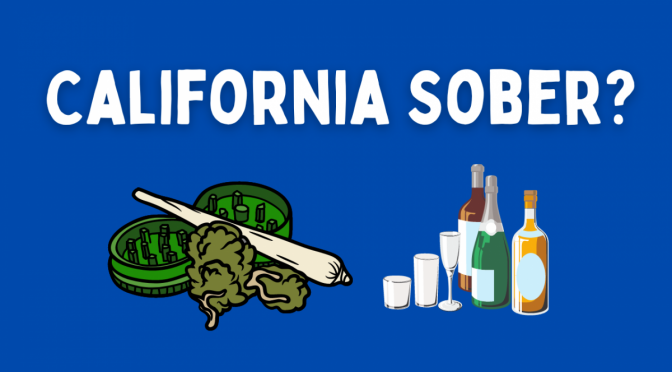 “I really believe in the ‘Cali sober’ method. It’s helped me. I actually just hit five years clean.” Aaron Carter made that declaration on Adam Grandmaison’s “No Jumper” podcast — just days before he died on November 5, 2022.  As he fingered a joint, he continued, “This, I don’t consider a drug. I consider this a gift from God.”

What is Cali sober and does it work?

In California, where the drug culture has been strong since the 1960s, many young people go into harm reduction therapy for the treatment of addiction, instead of abstinence.   California sober, or Cali sober, goes along with this trend. We see little evidence that this approach works.

California legalized weed in 2016 and some long-time drug users have adopted the California sober method, which means no drugs except weed.  Michelle Lhooq wrote about Cali Sober for VICE in 2019, after she moved from New York to Los Angeles.  Her “Cali sober” approach consisted of weed and psychedelics.  She considered it a step-down from her former cocktail of drugs: Adderall, cocaine, caffeine, nicotine, and weed for the daytime, MDMA and ketamine for nighttime raves.

After Aaron Carter died in his bathtub, having drowned, the police found cans of inhalants as well as prescription pills.  His official cause of death hasn’t been revealed.

In one of his last interviews, he nervously searched with annoyance for his weed, while packets of weed were right in front of him. He said that he didn’t want or need to smoke weed.

Carter had been diagnosed with both schizophrenia and bipolar disorder.  A child star who had sold 10 million records by age of 12, he followed the coattails of his older brother, Nick Carter of the Backstreet Boys.  In 2007, the family launched a reality show, House of Carter.  One of his sisters, Leslie, died of a drug overdose in 2012.  It hurts to be a child star.

Pop singer Demi Lovato was also a child star, on Barney & Friends.  In early 2021, she wrote a song titled “California Sober”   It goes:

“Cashin’ in my chips for forgiveness

Trading in my shame for perspective

Tired of being known for my sickness

Lovato has publicly battled addiction for years, going into her first treatment program in 2008.  She began using around 13 and at 17 started using cocaine, which became her favorite drug. She was diagnosed with bipolar disorder in 2011. After going through treatment in 2012, she kept sober for six years.  But, in 2018 she suffered from an overdose of Oxycodone laced with fentanyl.  Lovato nearly died, suffering three strokes, a heart attack, and blindness, and other lasting effects. Since then, the 30-year-old singer shared these struggles in music and a documentary, “Dancing with the Devil.”

In early 2021, the star announced a new strategy in her sobriety journey: “California Sober.” While traditional treatment programs call for total abstinence from all mind-changing substances, Lovato explained that surely a little recreational weed—legal in California—and an occasional drink couldn’t hurt too much. The singer explained it as harm reduction, a safe alternative to hard drugs, the “stuff that’s going to kill me.”

A Change of Heart

By the end ofthe year, however, Lovato confessed to a change of heart about that plan.  In December 2021, she posted a story on Instagram.  ‘I no longer support my California sober.’  ‘Sober sober is the only way to be.”

Marijuana is enjoying a privileged moment when the public perception hasn’t yet caught up with the changing reality of the drug and the effects of high-potency concentrations. Many unsuspecting people trusted that legalization equates to safety, but most states don’t have potency caps. Today pot stores sell concentrates with up to 95 percent THC.

If Aaron Carter and Demi Lovato never started using marijuana, or other drugs, perhaps they never would have experienced such ups and downs.  Lovato now thinks she was misdiagnosed as bipolar.  We wish her well.

Not only wrong but dangerous

A company sells t-shirts with the theme of California Sober.  Robin Abcarian, columnist, recently wrote about California Sober in the Los Angeles Times. The people who hear about this approach believe that cannabis is not a drug! The trend is dangerous because it misleads people.

Another celebrity, rapper Lil Keed, died on May 13, 2022 in Los Angeles at age 24.  He was also on the No Jumper podcast. The YouTuber reposted his interview with Lil Keed after news broke that he had died.  The rapper said that he didn’t do drugs, just henny and weed.  An  autopsy lists eosinophilia as the cause of death. The coroner’s office described the possibility of a fungal infection. Here’s data about the link between fungal infections and cannabis.  No doubt weed weakens one’s immune system.

As the number of daily or near-daily users has almost tripled over recent years, studies link cannabis use to increased suicidal thoughts, plans, and attempts. Other studies link it to increased risk for schizophrenia, depression, anxiety, and substance use disorders.

Smoking high-potency marijuana daily has been correlated with an almost five-fold chance of developing psychosis compared to those having never used it.

Aaron Carter admitted to using many drugs at a young age, but said, “Marijuana, that was mostly the problem.”