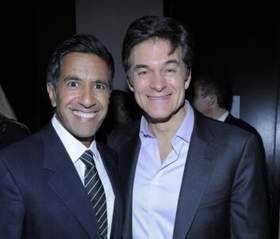 Celebrity doctors who channel their education into the pursuit of fame should be especially careful of misleading people with harmful advice.  One wonders why Dr. Sanjay Gupta and more recently, Dr. Oz, are singing the praises of medical marijuana. Most likely the marijuana industry has been working hard to get their support.

On the other hand, Dr. Bertha Madras, Harvard Professor, explained five reasons marijuana is not medicine in the Washington Post.  She coined the phrase, “It’s not a war on drugs, but defense of our brains.”   Dr. Madras will be giving a webinar today on the dangers of marijuana to the young brain.  (Dr. Robert DuPont, former head of NIDA, Agrawal Arpana of Washington University in St. Louis and Adriaan Bruijnzeel, UFBI, will also be part of the discussion.)

In specials on CNN, Dr. Gupta explained to the public the differences between CBD and THC.  He showed the changes in children who were treated with CBD in Colorado for epilepsy.  However, he did not tell the entire story, the fact that some children die while under this treatment.  CBD probably didn’t kill these kids, but it wasn’t a miracle as pot advocates explained it would be.  For political or profit motivation, some people call “medical” marijuana a “life-saving” treatment, an inaccurate characterization.  Although CBD has fewer toxic side effects than THC, it has interactions with other drugs, which the public does not know.

Dr. Oz recently advocated marijuana as a treatment for opioid addiction. There is plenty of evidence that this scheme does not work.  A recent study concluded that cannabis use appears to increase rather than decrease the risk of developing nonmedical prescription opioid use and opioid use disorder.

Furthermore, a study on smoked cannabis and pain actually demonstrated that too high a dose of THC can cause hyperalgesia meaning that the person becomes more sensitive to pain with continued use.   Here’s an article on the current state of research on marijuana and pain.

For those who think one addiction can treat another addiction, it’s worth mentioning that heroin was once suggested as a treatment for alcoholism.

This video shows a young man in Colorado who developed anxiety about two years after beginning his marijuana use.

Devin probably would not have anxiety if he hadn’t started using marijuana.    Devin, his mother and grandmother use marijuana for medical reasons, but it doesn’t appear that marijuana cures anything.  It appears that Devin and his mom have been deceived by those who are promoting “medical” marijuana.

Dr. Drew Pinsky, formerly an outspoken critic of marijuana, is less vigorous a critic than he once was.  Recently Joy Behar of “The View” tried to get him to endorse it as a treatment to replace opiate pills.

The marijuana industry wants the public to believe marijuana may reduce prescription opioid addiction and overdoses by providing an alternate or complementary pain relief option. That suggestion is partly based on comparisons of aggregate data from states that legalized marijuana for medical use vs. those that didn’t. However, the new study published September 25, 2017, focuses on individual marijuana users vs. nonusers. The study traced their trajectories with regard to opioid misuse and disorders.  This paper shows that people who use marijuana are more likely than non-users to use other drugs and develop problems with drug use.

Marijuana and pain pills are used together, not as substitute

Poppot has published a series of articles on .

Many of those addicted to opioids take marijuana and Xanax as well.   A California father using “medical” marijuana was in a single-car accident with two daughters who were badly injured.  Evidently the marijuana did not treat his conditions very well, since he also took methadone for his back pain and Xanax for his anxiety.     A crane operator who killed six people in Philadelphia while .  Most recently a mother who crashed her car into a train, killing her two children, used marijuana, meth and Xanax.

Celebrity doctors should explain why Americans have so much pain and why so many use marijuana together with their pain pills.

The public supports poor policies when they believe in bad information given out by the marijuana lobby.  Marijuana lobbyists tell us that the investment potential is just amazing.   Because most people don’t have the proper knowledge, 80% of voters support medical marijuana and 60% support legalization.  In the future, celebrity doctors need to consult specialists on the other side of the debate.

Let’s stick to honesty, not popularity.