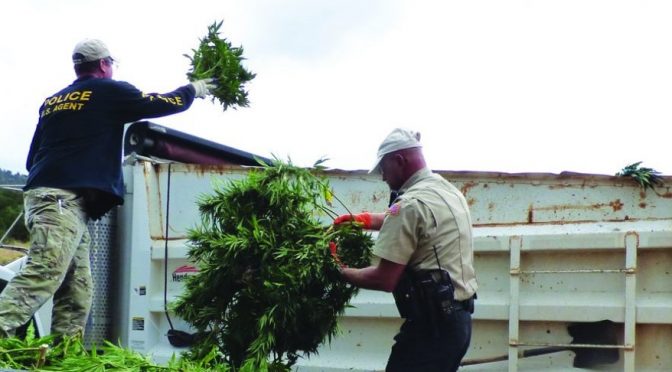 Whenever you listen to or read dialog from the pro-marijuana crowd, they say that legalizing marijuana will make the black market go away.  This statement is a blatant lie.  Rather, legalizing marijuana invites criminal organizations into your state and allows them to grow pot illegally under the guise of running a legal operation.

I am the owner of a summer home in rural Colorado with beautiful mountain views.  In the midst of this beauty, a Chinese group purchased a ten-acre parcel with a house near my home.  Within a year, they had cleared a section of the indigenous vegetation, which is so important to the survival of the local wildlife, and illegally grew thousands of marijuana plants.

These marijuana plants are not even native to Colorado or North America; in fact, they had to grow them in plastic pots because the rocky soil would not support their growth.  These growers also typically plant only hybrid female plants that produce unnaturally high and toxic levels of THC.  Such an operation so close to my home and being manned by illegal Chinese nationals made me and my family feel completely violated and endangered.  In fact,  this is when I first decided to purchase a firearm for protection, because local law enforcement was at least one hour away.

Luckily, this operation was busted by the DEA just before the autumn harvest occurred.  What is important to know is that after a drug bust, the plants are taken away, but the collateral damage, in the form of left over containers, pesticides, herbicides, and trash remained.

But the story does not stop here.  I found out from federal law enforcement that this type of operation is similar to “thousands” of other illegal operations located throughout Colorado.  This large number of illegal operations did not exist before legalization.  Because of logistical issues caused by the great distance away from federal law enforcement’s home base along with limited funding and manpower, federal law enforcement usually focuses on the illegal pot operations along the nearby front-range leaving rural areas of Colorado woefully unprotected.  Sadly, the criminals are aware of these limitations, and therefore rural areas have become a prime attraction for illegal marijuana operations and the many associated criminal activities such as human trafficking.

After experiencing this drug bust, I did my own investigation of this issue and found many suspect marijuana operations in rural Colorado.  What was discovered is a strong connection to Chinese, Cuban, or Eastern European groups along with many out-of-state individuals.  In some cases, the Asian operations have direct ties to mainland China through people working for a “state-owned” entity.  Further, some operations were setup such that the “legal” licensee is a Colorado resident while the “new” landowner is either from another state or even another country.

What is equally troubling is the way that local government officials (LGO) cater to marijuana operations, both legal and illegal operations.  The LGO’s ignored all the concerns and pleas from local long-term residents, while approving the majority of marijuana applicants. Most of the approved growers were not even people from the local area.  Additionally, the LGO’s basically did nothing about the illegal operations.  Or, if the operation was busted, the consequence for operating without a license(s) and permit(s) was basically a slap on the wrists by the local judicial system.

All states that have legalized marijuana have seen the same infiltration of foreign drug dealers who grow on the black market.  California’s black market remains much larger than its legal market for marijuana.

In closing, one definition of anarchy is simply lawlessness.   The truth of the matter is that the roots of lawlessness begin as soon as marijuana is legalized in a state, whether medical or recreational.  Further, once the roots of anarchy take hold, extreme violence, destruction, and homelessness occur within just a few years.  Basically, any state that legalizes marijuana can expect the exact same sequence of events to occur.

We can also expect the anarchy to be national, as it has been in Portland, Seattle, Minneapolis and Chicago, for months.  A number of the recent rioters at the Capitol were marijuana users, including “Baked Alaska” who takes his name from his habit.  A podcast of Jake Angeli, who wore horns to the Capitol, reveals  that he began getting high at age 11.