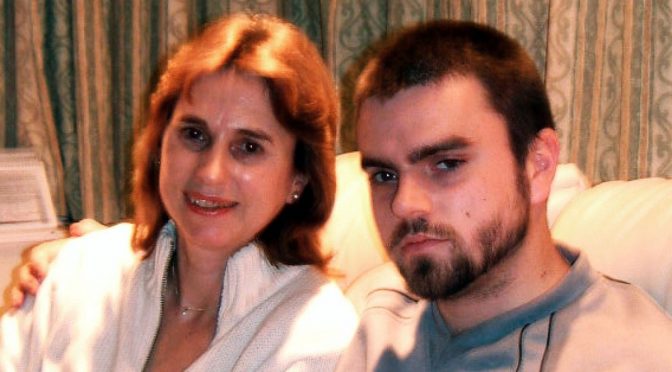 The following is the bulk of a letter from Janie Hamilton to Prime Minister Boris Johnson of Great Britain. We thank Mary Brett informing us, and Janie Hamilton for allowing us to share this letter.

Our beloved son, James, died on 31st July 2015 after a cannabis-induced psychotic refusal to accept life-saving treatment for testicular cancer.  He was 36 and did not have to die. The cannabis stole his life three times over – first it stole his young life from under our very eyes, then it possibly caused the testicular cancer, and then it stole his capacity to make a right-minded decision to have treatment at the first sign of the lump.

I now speak to hundreds of young people in schools, giving assemblies about the dangers of cannabis on the developing brain. They listen without moving and are left stunned and shocked and very saddened by James’ story. I have also spoken at Police Conferences and at a DrugFAM Conference. James’ story has also been heard on the radio a few times and appeared in a magazine. I have also been on TV a few times and James was the top story on BBC South Today in November 2017 after they came to film here.

How James’ story relates to legalization

I am dismayed beyond words at the stupidity of those who consider that legalizing cannabis is going to solve the problem and my heart sinks on two levels: firstly at the increase of lives to be derailed and wrecked and secondly, at the ignorance of the politicians. Unless they have lived with, witnessed and had first-hand experience of the misery, stress and grief caused by watching a beloved child changing out of all recognition after starting on cannabis, they truly can have no conception of the damage done by this drug.

Legalisation will cause more and more young people to experiment, because the message being sent out is that it’s legal – therefore it must be ok. From thereon, it’s just a ticking time-bomb in the lives of the many who don’t get away with it.

James was 14 when he began taking cannabis and it was only when he was 20, after 6 months of  bizarre behaviour, that we even began to consider that he might be mentally ill.

Cannabis was doing its damage in James’ brain all those years. And finally it stole his life. Your politicians should try sitting beside the grave of their child, as I did, a few days ago, on the 4th anniversary of his needless death.

If the politicians refuse to listen to those of us who know what damage cannabis does, then they will have to wait until the TRUTH speaks for itself and the mental health wards will be overflowing and unable to cope.

I would very much like to be able to come and tell James’ story to the relevant MPs – my presentation would take about 50 minutes. Is that too much to ask on a matter as serious as this? Cannabis is everyone’s problem – they just don’t know it yet. Legalisation is NOT the answer but educating the young in schools IS making a difference. It’s too late once they become politicians, it seems………………………….

My husband and remaining daughter and I endured 16 years of James’ illness, watching him suffer, locked up for much of that time, tormented in his head by the voices and delusions caused by cannabis. We had to watch his young life slipping away, his potential unrealized, and finally, watch as his actual life left his body.  I am passionate about wanting to save other young people and other families from the same fate. We have to face the rest of our lives without James.

Please give me the opportunity to tell James’ story to MPs.