Yesterday Rick Steves was on C-SPAN and he misrepresented marijuana legalization. For a more truthful representation of legalization, we advise our followers to listen to Luke Niforatos of Smart Approaches to Marijuana who was also on C-SPAN recently. In Steves’s home state of Washington, there’s a terrible track record of legalization violations.

According to the FBI, the murder rate in Washington rose 44% between 2013 and 2017.  Steves claimed crime did not go up.

Steves is wrong about the opposition to marijuana legalization. It’s people, not corporations, who oppose legalizing this addictive, toxic drug.  For the first few years, Washingtonians were silent, but Washingtonians Against the Legalization of Marijuana (WAALM) recently formed a group.   Here’s some of the legalization violations which the governor and the Seattle Times cover up:

Washington’s cannabis industry proves that it is hostile to all attempts at honest and sensible regulation.

The Washington Poison Control reported 378 cases of toxic exposure to marijuana in 2017.  On October 5, the Washington Liquor and Cannabis Board announced announced rules to end the production of cannabis-infused gummy bears and candies that appeal to children.  On October 12, the regulators reversed their decision because of fierce opposition from the marijuana industry.

July 17, 2017 – A man purchased marijuana edibles in Seattle before going on a flight from Seattle to Beijing. On the flight, went psychotic and tried to open airplane door, endangering all the passengers.  As he tried to open the door,an attendant and passenger helped to subdue him and he punched them.  In an affidavit, he said that he bought and ingested the drugs in Seattle before getting on the plane.  Everyone is in danger with this type of violent reaction to marijuana sold in stores today.

In Tacoma, on November, 30, 2016, a psychotic man who was a heavy pot user shot and killed policeman Jake Gutierrez. The mad pot user took his 6-year-old daughter hostage in bathroom for 10 hours, holding gun in one hand, daughter in other hand. https://www.kiro7.com/news/south-sound-news/officers-death-was-sudden-and-savage-then-a-10-hour-siege/522374048

5 teens in Everett, WA, killed a boy’s mother when she tried to defend her son.   The violent 16- and 17-year-olds were trying to steal the son’s marijuana and meth at the time.

A 16–year old murdered another 16-year-old in a Safeway parking lot, located in Vancouver, WA.  The victim was going to give a dealer, Jaycob Trotter cash, but Trotter ran over Cesar Ortiz-Velasco. 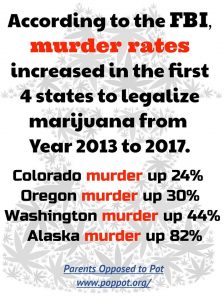 The two teens who shot and injured each other over a pot deal in Lynnwood, WA, on May 12, 2017, survived.

In St. Mary’s, WA, 15-year-old Jaylen Fryberg shot and killed 4 students he had invited to lunch with him the school cafeteria.  He killed himself, too. His Twitter account revealed that he was despondent over a breakup and was smoking a bowl of weed to get over it.  The girlfriend broke up with him because he smoked too much weed, and it made him stupid.

We’re not even talking about the traffic fatalities and butane hash oil deaths.  That’s another story.

Steves owes an apology to the families of those who have been harmed by marijuana. Just as victims have filed lawsuits against opioid makers, marijuana victims will be filing lawsuits.  It’s not pharmaceutical companies and beer companies who are against legalization, as Steves claims.  We do not own businesses that might lose money because of  legalization; we are people whose families have been harmed or will be harmed by marijuana commercialization.

Also, Steves inaccurately describes Europe, which has not and will not legalize marijuana.

The only thing he honestly admits is that the black market has continued in Washington since legalization. (Legalizers promised it would go away.)   He needs to stop insulting people, especially the families who have lost a loved ones to marijuana-induced mental illness, suicide or traffic death.  (For those who want to see Steves’s C-SPAN interview, it can be found on NORML’s Facebook page; we will not give him an audience.)

On May 19, KOMO TV presented a different picture of Washington, home to the two richest men in the United States.  The news report, Seattle is Dying, doesn’t mention legalization as the problem, but it suggests a drug addiction crisis as the cause of Seattle’s homelessness problems.