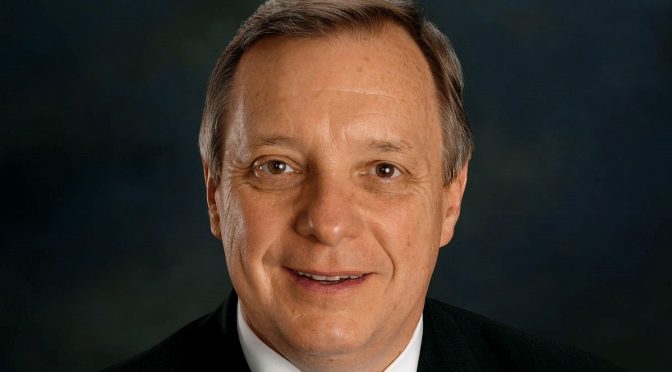 As published in the February 2 in the State-Journal-Register:                      U.S. Sen. DICK DURBIN, D-Illinois, says he doesn’t think Illinois should rush into making recreational use of marijuana legal.

Durbin, of Springfield, was asked about the issue when appearing on another topic last week at the Memorial Center for Learning and Innovation.

“I can remember the worst times, when it came to marijuana, and when I was a lawyer in this town, and somebody with a 17-year-old son would come in and say, ‘My kid just got busted for smoking pot,’” Durbin said. “They wanted to know … whether or not there was any way to spare their son from the embarrassment and possibly life-changing results of being prosecuted for smoking a joint.”

He said he thought that was “extreme,” but “now we’ve got to take care that we don’t go to the other extreme.”

Because of conflicts in state and federal law, Durbin said, the federal government hasn’t tested marijuana, like it does other drugs, for safety and effectiveness. While he is OK with medical use of marijuana to provide pain relief and help alleviate the “devastation of opioids,” he said, “what’s missing here is the usual course of clinical trials” he thinks are needed before recreational use moves forward.

Durbin said he recommends a recent article by MALCOLM GLADWELL in The New Yorker. The headline of the online version is: “Is Marijuana as Safe as We Think?”

He said it discusses “the impact of legalizing marijuana in many states … and what they have seen as a result of it: the increase in traffic accidents; certain mental health conditions seem to be more prevalent in those states. These are all legitimate clinical questions that should be asked and tested.”

Durbin also said challenges include figuring out how to measure impairment to protect people driving and operating heavy machinery.

“Those sorts of things are legitimate questions,” Durbin said. “We had possibly good answers when it came to alcohol, but when it comes to marijuana, I think we’re in new territory.”

He also said he knows that in the case of Illinois, the legalization decision is up to state officials.

On Feb. 4th, Catholic Bishops of Illinois issued statements, in English, in Spanish and in Polish, against the legalization of marijuana. It reads:

“Legislation that would legalize marijuana for recreational use will be considered in the Illinois General Assembly. The Catholic bishops of Illinois are committed to the common good, and therefore advise against legalization.

“Data collected by government agencies and public-interest groups document that drug use is rampant in modern society. Just a few years ago, we heard too many stories of children turned into orphans after their parents overdosed on heroin. Today, we hear of the opioid crisis and the lives it claims. If marijuana is legalized, it will only add to the problem.

“Advocates of legalization rightly point to the racial disparity of our jail and prison populations, noting that marijuana infractions often lead to lives trapped in the criminal justice system. We recognize the truth of that premise, while observing that recent sentencing reforms should soon reverse that trend, since possession of less than 10 grams of marijuana now results in a ticket of up to $200 and no jail time.

“Medical marijuana dispensaries already exist across Illinois, ready to be converted into retail stores for customers 21 and older, leading proponents to predict that legalization will eradicate the black market. Will that actually happen, or will the black market simply sell marijuana at a lower price and to those under age?

“As lawmakers consider this issue, it is important to remember they are not only debating legalization of marijuana, but also commercialization of a drug into an industry the state will profit from. In seeking the common good, the state should protect its citizens.

“We ask lawmakers to say ‘no’ to legalization of marijuana, as Pope Francis explained in 2014 when speaking about marijuana and other recreational drugs: ‘… To say this ‘no,’ one has to say ‘yes’ to life, ‘yes’ to love, ‘yes’ to others, ‘yes’ to education, ‘yes’ to greater job opportunities. If we say ‘yes’ to all these things, there will be no room for illicit drugs, for alcohol abuse, for other forms of addiction.'”

Medical Marijuana and Decriminalizing Marijuana have Made Illinois Less Safe

Senator Durbin and Illinois bishops are wise to warn legislators and residents.  The senator is correct about the increase in traffic deaths.  After decriminalization, traffic deaths involving a driver who used cannabis rose from 14% to 19% in Illinois.

Illinois’ new governor, JB Pritzker, wants to legalize marijuana.  He has the ridiculous notion that marijuana would be profitable as a source of tax revenue.