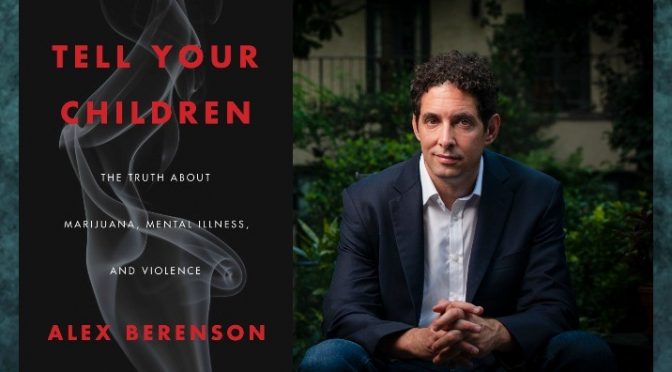 A former New York Times reporter and now a best-selling author, Alex Berenson has an important new book, Tell Your Children: The truth about marijuana, violence and mental health. Simon & Schuster will publish and release it on January 8, 2019.

Indeed Berenson’s book promises to confirm the facts that we’ve been warning about: the marijuana-psychosis links; that pot use often makes people violent; that it leads to more crime, more overall drug abuse and more fatalities.  As we try to “tell our children,” NO amount of marijuana use is worth the risks. 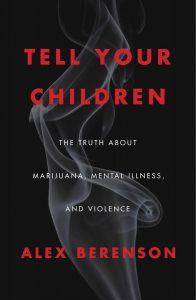 • Almost no one is in prison for marijuana;
• A tiny fraction of doctors write most authorizations for medical marijuana, mostly for people who have already used;
• Marijuana use is linked to opiate and cocaine use. Since 2008, the US and Canada have seen soaring marijuana use and an opiate epidemic. Britain has falling marijuana use and no epidemic;
• Most of all, THC—the chemical in marijuana responsible for the drug’s high—can cause psychotic episodes. After decades of studies, scientists no longer seriously debate if marijuana causes psychosis.

Psychosis brings violence, and cannabis-linked violence is spreading. In the four states that first legalized, murders have risen 25 percent since legalization, even more than the recent national increase.

According to the overview on Barnes & Noble and a description on Amazon, “Berenson’s reporting ranges from the London institute that is home to the scientists who helped prove the cannabis-psychosis link to the Colorado prison where a man now serves a thirty-year sentence after eating a THC-laced candy bar and killing his wife. He sticks to the facts, and they are devastating.”

“With the US already gripped by one drug epidemic, this book will make readers reconsider if marijuana use is worth the risk.”

Alex Berenson on the Internet and in social media

Berenson is best known for a series of spy novels featuring CIA operative John Wells.  He won the Edgar Prize in 2007 for the best new novel by a mystery writer.

The following is taken from an email found in Alex Berenson’s social media account:

“When I worked for the New York Times, I looked for stories that were:   1) Important to lots of people;     2) Had potential for harm;   3) Not well-known; counter-intuitive, or both, and   4) True – and I don’t mean technically accurate, I mean true in the deepest sense, where I wouldn’t need to load up a story with lots of caveats.

“Stories that check all four of those boxes are rare indeed.  I remember only a couple in my 15-plus years as a reporter.  But I’ve come across another one and it is so important that I decided to put Wells on the back burner.  I would like to believe he’d understand.”

He continued: “I know this topic is controversial……I spoke to scores of scientists and doctors and examined hundreds of studies and papers. Whatever you think of marijuana, you owe it to yourself and to your families to know the truth that legalizers and the media have hidden from you.”

At the New York Times, Berenson covered everything from the drug industry to Hurricane Katrina to Bernie Madoff.  He served two stints as a correspondent in Iraq, in 2003 and 2004.  He’s a graduate of Yale University.

Before the New York Times, Berenson honed his skills writing for the Denver Post. The rich variety of subjects he has explored suggests that he is the ideal investigative journalist to expose the marijuana scam.  He also wrote three non-fiction books, reflecting his time as a journalist.

The American media has largely ignored the truths about marijuana, despite some obvious evidence. It’s a triumph of the marijuana lobby’s marketing and public relations efforts that almost all Americans believe marijuana should be legal for medical use. Advocates argue cannabis can help everyone from veterans to cancer sufferers. Berenson’s book will shatter the myths and expose the truths.