Three news stories exemplify the tragic results of mixing alcohol and marijuana before getting behind the wheel of a moving vehicle.  Most recently, a suspected-DUI driver crashed into a California Highway patrolman in a parked vehicle on Christmas Eve.  Andrew Camilleri, 33, died instantly.  He left behind a wife and three children.

A New York teen admitted that he used both marijuana and beer before the crash that killed his 16-year-old friend on August 31.  Another 14 year-old in the vehicle was injured. Authorities have charged the teen with vehicular homicide and vehicular assault.  Yet, the teen claimed that he didn’t feel that he was ‘messed up.’   He said that he had taken 3 or 4 hits of a joint, and drank from two partial cans of beer.  But when driving, he “encountered a deer on the road and swerved to avoid it,” leading to the crash.

On October 24, Kraig Diggs, 20,  Jordan Galvin-Jutras, 19,  Jordan Fisher, 19, Cory Licata, 18, died instantly on a Massachusetts highway.  Valentein Burson, 31, killed the  four college students and herself while driving wrong way into oncoming traffic.   A local fire chief who knew one of the victims described the fiery crash as a “tragedy, almost indescrible.”   Burson left a party at 11 p.m., after drinking alcohol and smoking pot, according to friends.   Toxicology tests revealed a blood alcohol count of only .016  (0.08 is legally impaired).

Check out this news video about the first story.

Researchers at the University of Iowa compared the effects of combining low-THC marijuana and alcohol, as well a higher-THC marijuana and alcohol. Thirty-two healthy adults (22 of them male) participated in the study.   Alcohol plus marijuana impaired the THC removal from the body, thus raising the blood levels of THC over subjects tested with marijuana and no alcohol. See Controlled Cannabis Vaporizer Administration: Blood and Plasma Cannabinoids with and without Alcohol.

Science News reported on the study, saying, “any dose of alcohol combined with cannabis significantly increases levels of THC in blood.  Cannabis plus alcohol is one of the most frequently detected drug combinations in car accidents, yet the interaction of these two compounds is still poorly understood.”

The study focused on vaporized cannabis, a preferred method of ingesting the drug.  E-cigarettes or vape pens can disguise drug use in the workplace and schools, because there is no detectable odor. Vaporizing would be a preferred method in a restaurant or bar setting where alcohol is served and smoking would be socially unacceptable.  Proponents of vaping claim it is safer to vape while driving than to smoke, and less of a fire risk.  No one should be vaping marijuana while driving, as it endangers everyone.

Higher blood levels of substances that effect judgement, reaction time, attention, time and speed perception result in auto fatalities.  Colorado legalized marijuana in 2013 and commercialized it  in 2014.  Marijuana-related traffic deaths increased 66 percent on average (2013-2016), compared to the 4 years prior to legalization. 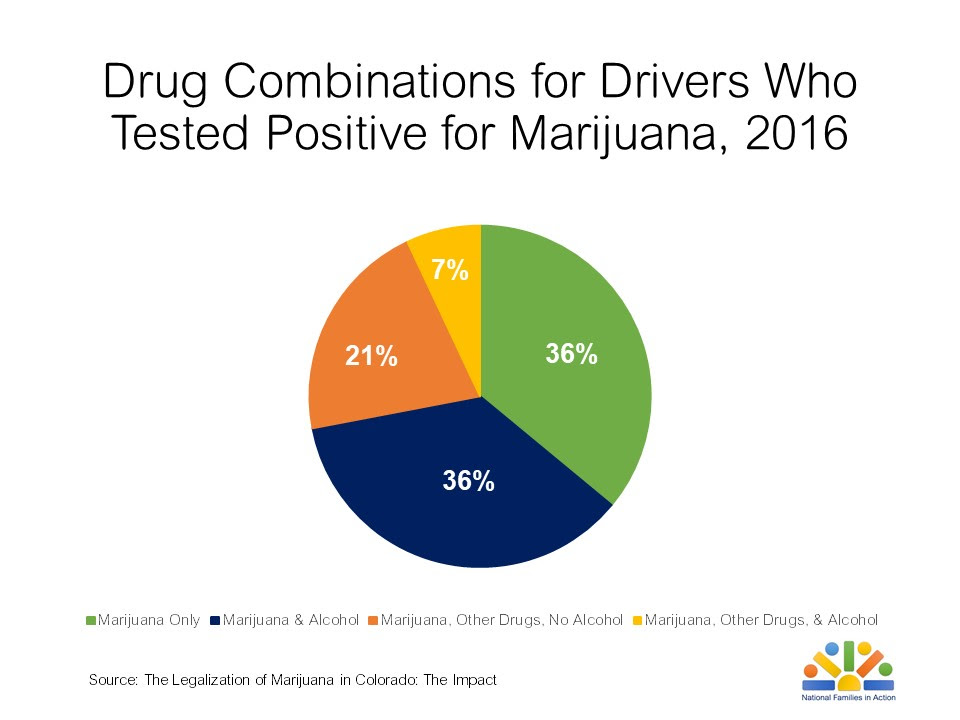 Adults and Teens Need to Be Educated

Driving while intoxicated costs lives. The myth that people drive better while high tricks many people into going behind the wheel while impaired. This belief and a misconception that users choose between marijuana and alcohol keeps the public in the dark about the hazard of mixing the two substances.  Marijuana alone doubles the risk of a crash.  By adding alcohol to marijuana, the risk goes up six fold or more.

Adding a joint to that beer becomes more impairing than just having another beer.  Although the marijuana normally leaves the blood quickly, it’s still stored in the fat cells of the brain.  The driving impairment continues longer than many users suspect.

The rush to legalize marijuana doesn’t take into account the highway fatalities that naturally result.  Sheila Polk, a county attorney in Arizona wrote: “Colorado was the first state to legalize marijuana entirely. Today, potency levels are higher than ever. Someone dies there every three days in a marijuana- related traffic accident. Such crashes have doubled in four years, putting the lie to the ‘safer than alcohol’ claim.”  Read her editorial, States Don’t Get to Ignore Federal Laws on Marijuana.

We ask our politicians and civic leaders to become well informed. Please review all these PopPot.org stories about drugged driving dangers.  Alcohol plus marijuana results in more deaths –PERIOD!