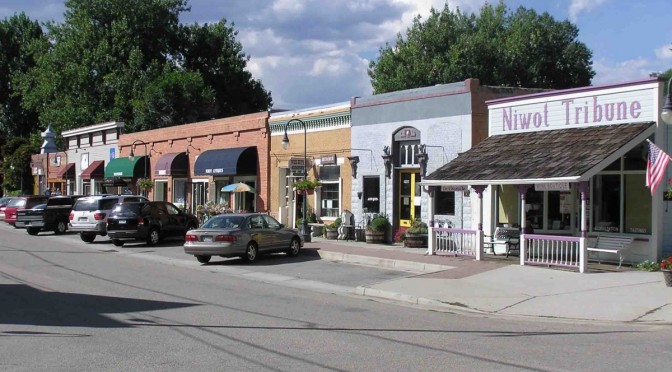 Niwot, a town on the outskirts of Boulder, Colorado, is yet another jurisdiction fighting to keep big marijuana businesses out of the community. Entrepreneurs Ernie and Callie Craumer, of Connecticut, invested in Colorado real estate with the intent of renting the building to a pot grower. They’re seeking a land use permit for the vacant building at 6924 N. 79th St., a few blocks south of the community’s downtown area. The permit, if granted would allow both a grow facility and retail sales of the drug.  The owners originally thought of living in the area, but decided against it after feeling out the opposition.

Dick Piland, head of the Niwot Community Association (NCA), explains that the family-oriented community of only 4,000 residents is opposed to the Craumer’s business plan. “70% of our community is against this facility, yet we fear the Boulder County Commissioner’s approval.” Last year the Commission approved a pot grow in another town, despite heavy opposition. In that instance, neighbors spoke out against pesticides, fungicides & herbicides that would come with it, as many of them were organic gardeners. They also didn’t want their kids waiting for the school bus to see armed guards protecting the marijuana grower. Despite the vocal resistance the Boulder County Commissioners approved the land use permit.

The Niwot community seeks to prevent a similar outcome. In this case, out-of-state entrepreneurs are trying to overrun the community with their money-making scheme.  Despite the small town atmosphere, Niwot is the headquarters of Crocs footwear company.

DailyCamera.com reported the views of several opponents to the Craumer’s petition. “This business doesn’t cater to families. It’s not the right place for this. It will bring more crime to the area,” said Sheila Perry, a Niwot resident for 22 years. Similar outcry was heard from Kay Ingram, a Niwot resident for 10 years. “It doesn’t fit in with the character of this community. ”  Residents don’t care about lost tax revenue or jobs a grow facility and dispensary might create.

Boulder County already has 62 marijuana growers, and residents have had enough of the problems, the intrusion into children’s lives, environmental problems and lifestyle issues.

Concerned citizens are asked to express views at niwot.org. The poll is open to NCA members and the public. The survey will run from March 25-April 8 and results will be posted to niwot.org before the NCA Annual Meeting on April 15.