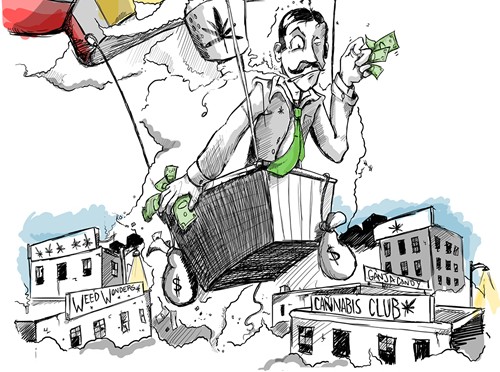 The next Colorado Healthy Kids survey might show how strongly the marijuana industry is having an influence on Colorado’s children.  If the state doesn’t keep the survey, how can it judge what the legal recreational marijuana program is doing to its school children?   The national survey showed that youth usage in Colorado went up sharply 5-10 years ago, during the period of medical marijuana expansion, while it remained rather flat nationwide. (see chart below) 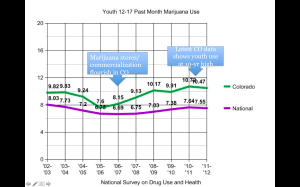 Two groups the Health Kids Survey are the parents who are represented by Smart Colorado and Parents For a Healthy Colorado.  Both groups work hard to restrict commercialization and to assure that the highly potent marijuana edibles are kept away from children.   More restrictions are needed on the packaging, labeling and stamping of edibles.

In the meantime, members of Congress are introducing legislation to expand marijuana, to open the floodgates to big marijuana.  Today three Senators will announce a bill to open up so called “medical” marijuana, another step to making this big business.  The senators have allowed the Drug Policy Alliance, Marijuana Policy Project and Americans for Safe Access craft the bill, rather than seeking out the scientific and medical communities.

The Ascendency of Big Marijuana

Two members of Congress who come from marijuana states are advocating for the expansion of big marijuana.  On February 20, U.S. Representatives Jared Polis of Colorado and Earl Blumenauer  of Oregon introduced two new bills for federal marijuana legalization.

Blumenauer’s bill, the Marijuana Tax Revenue Act of 2015 (HR 1014), would place a federal excise tax on marijuana, and occupational taxes on the marijuana-related businesses.  Polis’ HR 1013, The Regulate Marijuana Like Alcohol Act, would transfer enforcement from the Drug Enforcement Agency to the Bureau of Alcohol, Tobacco, Firearms and Explosives.

In this environment, big marijuana firms similar to big tobacco and big alcohol will develop.  Some entrepreneurs have already declared their desire to become the “Anheuser-Busch of marijuana.” Anheuser-Busch and large conglomerates dominate the alcohol and tobacco markets, under the multi-tier taxing and licensing system. The extra costs of these requirements keep small producers out of these industries.  The same process will ultimately lead to “big marijuana” conglomerates with market power and advertising budgets. Should it be called “Big Dope” or “Big Weed?”