Phil Vischer, founder of Veggie Tales, has a powerful new video on race.  After discussing racism, he calls out the “war on drugs” and policing, as potential reasons for continued wealth disparity between blacks and whites. His video doesn’t explain how drug use ravages individuals and communities.

Vischer doesn’t claim to know the solutions, but he calls upon people to “care.”  But, we ask, where’s the caring for children who die in the crossfire of drug wars or gang wars?  What about the children of all races killed by drug-using parents? END_OF_DOCUMENT_TOKEN_TO_BE_REPLACED 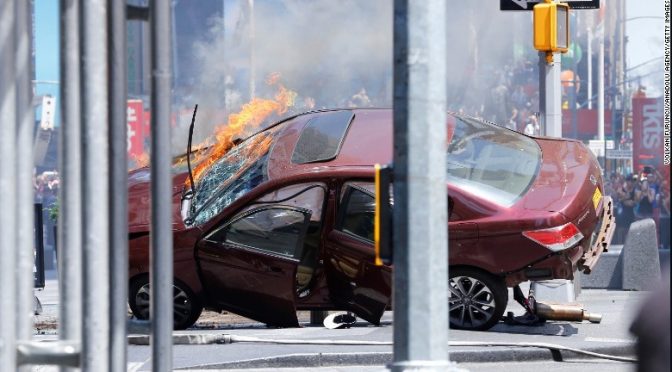 Parents Opposed to Pot calls on the Press to be more transparent in reporting the dangers and damage of marijuana.

Shortly after the Times Square incident, in which the driver was high on marijuana, German Lopez of Vox wrote an article calling for more attention to be focused on drunk driving.   One 18-year-old woman died and 22 more people were injured on May 18.  It was a terrifying incident, and the driver acted like a madman.  He was later sorry for the incident.  (Photo above is from CNN)

Toxicology reports said the driver tested negative for alcohol, but positive for drugs.  Some news sources suggested he was high on marijuana laced with PCP.  Other news sources said he “smoked” something, “synthetic marijuana” or K2 Spice, or just PCP.

When there are psychotic rants and when “demons” or “voices” tell a person to do it, it’s more often drugged than drunken behavior.  Marijuana, particularly the super strong strains available today, is a drug likely to do that to someone.

Vox later corrected the story to say drugs, not alcohol caused the accident.  Vox never admitted that that marijuana was the drug.  When will there be a follow-up article, listing a litany of problems caused by driving under the influence of marijuana or drugs?  MRC reports that German Lopez has written more than 30 articles in favor of marijuana.

The website Lopez works for, Vox, puts up strange video with simplistic statements about marijuana.  However, it starts with the supposition that Congress had no business making marijuana a Schedule I drug.  Narrator Ezra Klein uses the slick film compare marijuana to alcohol.  Yes, alcohol is dangerous and brings out anger and can cause toxic overdose. But the risky behaviors from pot are very different.

Vox should remove this video from the Internet and apologize for posting misleading information. There are certainly people who will drive impaired after having seen the video.   The severe mental health risks of using marijuana for a short period of time are not a parallel with alcohol use.

Other Cases of Marijuana Psychosis

About five years ago, a man was eating the face of a homeless man in Florida.  Reporters thought the man was under the influence of Bath Salts.   However, tests showed that he only had marijuana in his system.

On May 9, a man high on marijuana was going 100 mph and killed another man in Nevada.  The driver denies that he was responsible but says car was taken over by demons.

Also in Nevada, Lekeisha Holloway, a woman from Oregon who drove into a crowd in Las Vegas, was high on marijuana at the time.

Impairment by marijuana is much more likely to bring out the crazy, psychotic rants like happened on Times Square or in the MAX train in Portland.   Impairment by pot also caused one of the most dangerous train crashes in American history in 1988.   Fourteen people died when both the Conrail engineer and his brakeman were stoned.

Why does much of the Press, including Voxdotcom, think that wisdom from past experience is irrelevant?  If some Vox and other news sources don’t stop the exaggerations about pot, they will lose all credibility for reporting on other issues.

Ariana Huffington was made part of the Honorary Board of Drug Policy Alliance, a reason that news service publishes many pro-pot articles.  Readers need to be skeptical of anything that Christopher Ingraham of the Washington Post writes about marijuana, as he is very biased.  He used to work for the Brookings Institution which gave up its independent stance in order to take money from Peter Lewis.  Lewis’ money was earmarked to support legalization of marijuana.

It could be that newspapers are hoping that marijuana businesses could bring in new sources of advertising money and boost their bottom lines.  However, there’s recent news that The Cannabist at the Denver Post had to lay off its ad sales staff.

Why is there such fear in bringing up the truth about marijuana which can lead to psychosis in some individuals?  Reactions to marijuana vary from person to person. They also vary from how much, how strong the pot is and how young the person is when they start using the drug.  Today’s pot is extremely strong and people who tolerated pot 30 years ago may have great difficulty withstanding the pot of today.