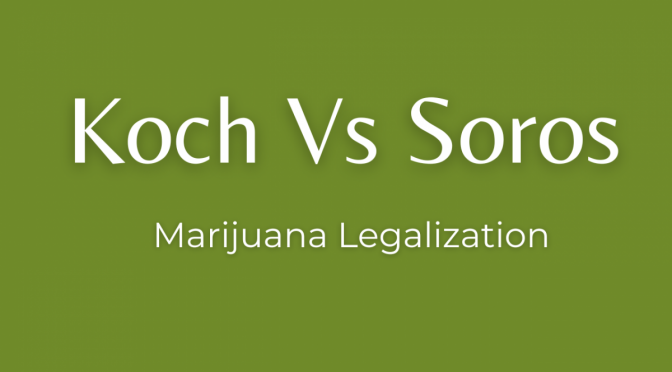 Over the past 30 years, George Soros has spent about $100,000,000 of his own money to legalize marijuana.  Charles Koch, of Koch-brother fame, is also in the game.   Americans deserve to know how much megadonors control our daily lives.

For parents fighting to save kids from drug addiction and pay for treatment, we’re perplexed at their callous indifference to our plight.

The pollsters offer a selling point for legalization, too, claiming that 70% of the country supports legalization.  However, both Pew and Gallop Polls come out inaccurate, because they don’t word the question properly.  They never ask whether people prefer decriminalization or legalization.

What is the difference between the Koch and Soros programs?  While Charles Koch supports the market-based model for legalization, Soros regularly supports the candidates who are part of the Progressive movement within the Democratic Party.

Regardless of which roadmap a state follows to legalization, all roads lead to monopolies.   (We will show this conclusion in a two-part series. Subscribe to our blog to read Part II)

When did it all begin?

Soros has been funding legalization projects since 1996, when he helped pass California’s successful medical marijuana ballot.   He brought in other financiers such as Peter Lewis.  Lewis, who died in 2014, funded the Marijuana Policy Project, and may have left his estate to the group.

Charles Koch put $25 million into legalization advocacy to legalize marijuana in 2021, while Soros branched out into other causes.

The difference between the megadonors points to differences in their philosophies. Before David Koch died, the Koch Brothers made donations to non-MAGA, Republican politicians who promote free-market principles and capitalism.

Soros is also a supreme capitalist in action, but a financier of socialist causes.  His justice philosophy mixes with his drug freedom beliefs.

New York’s legalization model is a social justice model, with the state authorizing $200 million in loans to social equity applicants.   Those convicted of marijuana offenses or their families will get the first 100 licenses. Yet the social equity groups complain that “they’re being set up for failure.”

The social justice model claims to support ma-and-pot shops over corporations. Social equity programs either don’t work, as in California, or they are misused badly as in the state of Illinois.  Either way, state pot programs are magnets for corruption.

In Illinois, the legislature wrote social justice into the 2019 legislation while giving the first licenses to existing medical pot stores, assuring monopoly.  (The governor could have vetoed it.)  Claiming that legalization will solve equity and social justice concerns is a  selling point for marijuana legalization.

In Illinois, companies cheat in the ways they qualify for social justice licenses.  In some cases, once social justice applicants got licenses, they resold them to existing pot shops, enhancing monopolies.   That’s how the big power players will end up controlling the industry, ultimately shutting out mom-and-pot shops.

Today in New York City, we see another fatal flaw of the social justice approach to legalization.  Public officials, fearful of being called drug warriors, won’t stop the fly-by-night drug dealers who set up trucks selling THC all over the city.  New York promises to open its first licensed pot shops in a matter of weeks, but the city and state won’t stop the unlicensed dealers.   Recreational marijuana is doomed to fail for this reason, just as it did in California.  Instead of learning from the mistakes of other states, New York politicians doubled down on their mistakes.

States’ rights, social justice and the “failed war on drugs” are calling cards for those seeking legalization, but greed and more drugs win.

No wonder former New York Mayor Michael Bloomberg called efforts to legalize marijuana “perhaps the stupidest thing anybody has ever done.”  Bloomberg’s claim rings true when we examine the tax money.  As Politico reported in 2019, legalization was supposed to be a tax windfall, but fell short.

Read Part 2 of Soros vs. Koch.