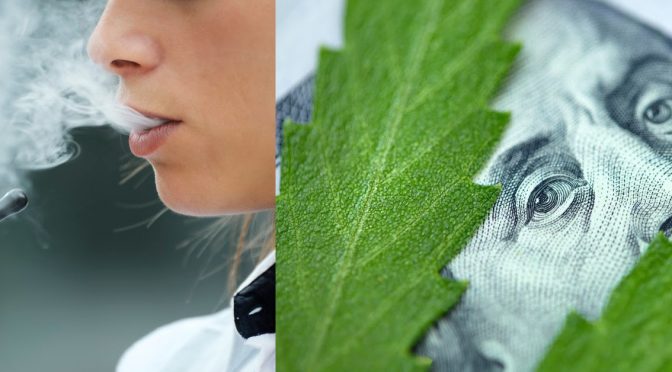 As the Surgeon General warned In 2016, vaping by teens had begun to rise dramatically that year.  This rise in vaping e-cigarettes played a role in reversing a long-term decline of teen smoking. In the coming weeks, the FDA will be making a decision whether or not to ban flavored vapes.  Flavors like mango and mint enticed so many teens who got hooked on nicotine through vaping.

Is marijuana industry going to fall out of the public’s favor, like Juul did?  Throughout the birth and rise of Juul, its founders built upon the nascent marijuana industry.  When Altria, the maker of Marlboro, bought a 35% percent stake in Juul, the company also bought a 45% stake in Cronos, a Canadian marijuana firm.  Both investments are far below their market valuations of two years ago.

The marketing of Juul wouldn’t have been so easy without the rise of marijuana, and the push to legalize it.

Two new books tell of the rise and fall of Juul: Big Vape by Jamie Ducharme and The Devil’s Playbook, by Lauren Etter.  Both books trace the story of how the idea began with two graduates students at Stanford around 2005.  Etter also explains much of Altria’s recent history and its attempts to obtain a marketable substitute for tobacco cigarettes. It has taken years for e-cigarettes to finally come under FDA regulation, and it will be interesting to see what happens.

Promotion of a product for “harm reduction” is in itself problematic because it creates new types of harm. From what can be learned from Etter’s book, these parallels between the marijuana industry and Juul emerge:

1) The initial product prototype for Juul was Ploom, which took off because it was mostly used for marijuana vaping. The original entrepreneurs, Adam Bowen and James Monsees, wanted a product that could do equally well for nicotine vaping.  It took much trial and error, and new people came in to run the company.  After the leaders finally had a good nicotine vape, they spun off Juul Labs into a new company.  Pax Labs remained a marijuana vaping company.

4) Juul’s formula was  much more powerful than it had to be. Juul contains a 5% nicotine formula, a level never allowed by the European Union which hasn’t had comparable problems with teens vaping. Juul addicted many people who were new users, just as the marijuana industry addicted new users with turbo-charged marijuana edibles, dabs and vapes.

The marketing of appealing products for THC and e-cigarettes

5) Juul came up with exciting flavors that appeal to children. The marijuana industry promotes its products in form of popular sweets and candies, such as gummy bears.

Click here to read Part 2: Who is to Blame for Vaping Illnesses and Addiction?