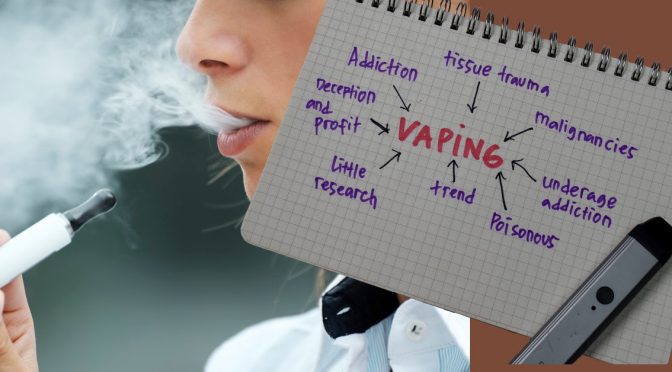 Who is to blame for addicting kids to nicotine and causing the vaping illnesses that sickened and even killed so many people?  Juul and its backers piggybacked onto marijuana legalization and used similar marketing schemes.  Read Part 1.

With fits and starts, Adam Bowen and James Monsees worked diligently over several years to come up with a product that would replace traditional cigarettes. They enlisted the help of venture capitalists from Silicon Valley, including some of the Pritzkers who fund marijuana companies, too. They never imagined getting involved with Big Tobacco.

Their story of one of entrepreneurial spirit and the desire to make a an extraordinary hit. Once  they became successful, they wanted more and more. A slick art director came in and retooled the marketing efforts with style and pizzaz. Puff, and Juul launched with splashy opening parties, and social media helped it take off.

Of course, the company certainly must have noticed that it appealed strongly to teens. But, once everyone realized what they were doing, it was too late to stop it.

Opposition became strong when the children of other Silicon Valley parents and New York bankers became addicted, too.  A huge and powerful parent opposition was born, Parents Against Vaping e-cigarettes, PAVe, in 2017.  Currently, PAVe asks the public to write the FDA and voice opposition to menthol vapes. Here’s the petition.

Juul has been hit Is with several lawsuits, including the attorney generals of North Carolina and Massachusetts.   Altria and its shareholders are probably regretting their investment. The tobacco company bought Juul for $12.5 billion dollars (worth 4 billion now) and they paid $16.85 per share for Cronos, which sells for around $10 Canadian dollars per share now.

Trouble in Wisconsin awakens the country

A mysterious lung disease was noticed in the summer of 2019, right after the Juul-Altria deal.  Thanks to astute doctors in Milwaukee and Northern Illinois who noticed the coincidence of several teens getting sick during a short period of time. It turned out that all the teens who got sick were vaping.  Elsewhere the condition was reported, not just with teens, but with older medical marijuana users.

According to the CDC, eighty-two percent of those with EVALI were vaping THC, including many people who died. Of course Juul cannot shoulder all of the blame for the lung disease crisis which occurred right before COVID.  The CDC investigated and believes that much of the illness traces to black market THC vapes cut with vitamin-e acetate.

In Southern Wisconsin, 20-year-old Tyler Huffhines set up a vaping factory, replacing vape pods with THC bought from California and marketed to teens. His mother and brother helped him.

It’s astounding how someone so young was able to create a criminal enterprise that was so successful and destructive. In September 2019, the federal agents caught up with him, and he will face justice soon.

However, for victims of vaping illnesses, it is too late.  Logan Krahn, a victim  described in The Devil’s Playbook, recovered from his nicotine addiction.  However, he may always have reduced pulmonary function and his lungs may not fully recover.

Not learning from past mistakes

Our country makes the same mistakes over and over again — opioids, Juul, marijuana.  Too many Americans buy into the idea of short-term profit rather than slow and steady road to success.  Therefore, they think a few lousy jobs in the marijuana industry helps the economy, but they don’t think of the real costs.

Etter sums up the problem on p. 184 of her book:  “Juul may have started with a mission — Destroy Big Tobacco — but it wasn’t long before it started to deeply internalize the mores of Silicon Valley.  Move fast. Blitzscale. Ask forgiveness, not permission. Aggressively inundate the world with their products before regulators figure out what hit them.”

Silicon Valley mints sudden billionaires, with a motto, “Move fast and break things.”  Unfortunately, these entrepreneurs put profit above all, sacrificing the mental and physical health of our youth for their success.

Click here to read Part 1: Marijuana, E-Cigarettes, Juul and the Crossovers Between Them