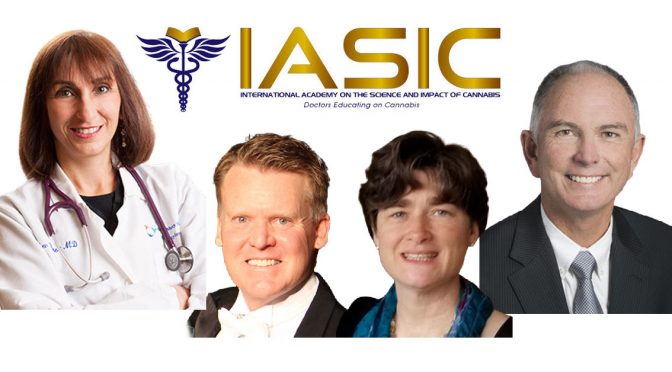 A doctors’ group is taking on cannabis education.  On May 20, 2021, the International Academy on the Science and Impact of Cannabis (IASIC) officially launched with a press conference held in San Diego and live streamed across the country.

President of the newly-launched group IASIC, Dr. Eric Voth, is no stranger to addiction and drug policy work.  In his forty years involved in the fields of Internal Medicine, Pain Medicine and Addiction Medicine, he confidently asserts, “…We’ve seen marijuana become a serious public health problem…Today, as a direct result of rigorous efforts to legalize and normalize marijauna, it is responsible for a host of medical problems.”

IASIC has been founded to fill the serious void of knowledge on the medical, societal, and social consequences of marijuana use and abuse.  The distinguished doctors will help to clear up some of the myths about marijuana, such as the belief that ‘pot isn’t addictive.’

Dr. Catherine Antley, Secretary/Treasurer of IASIC, also spoke at the press conference.  She quoted Dr. Sir Robin Murray, one of the world’s most respected authorities on schizophrenia and psychosis, stating, “No serious scientist continues to dispute that cannabis is a component cause of psychosis and schizophrenia.”  She continued, asserting that drug treatment is the least effective, most expensive way to deal with an epidemic of addiction.  Prevention is the answer, and prevention is possible through education.  Addiction now touches one in three American families.

Dr. Ken Finn, editor of the only medical grade resource on marijuana, Cannabis in Medicine: An Evidence-Based Approach, points out that even though 90% of marijuana medical cards issued in Colorado are for “pain”, opioid addiction and overdoses have skyrocketed.  Dr. Finn is a Vice President of the organization.  His pain patients who supplement with “medical marijuana” find it more difficult to get off opioid medications.

Dr. Roneet Lev, an emergency medical physician and also a vice president, made clear that IASIC consists of doctors educating doctors and the public on the impacts of marijuana. The Academy’s library at iasic1.org will yield over 15,000 studies completed.  She makes very clear that the group, like so many others, is not looking for a “war on drugs”, but for education. The education is for the public and for doctors, in order for all to make informed decisions.

Where there is equal access to outlets for public education, there is no need for a battle of any kind.  The American public needs to know, especially as many states are making the decision to increase drug accessibility and use, and we deserve the truth.

Due to clever propaganda, the influence of the marijuana industry and incomplete data collection processes, Americans today have been slow at understanding the facts of marijuana.

Leadership, Board of Directors

Dr. Voth is a specialist in Internal Medicine, Pain Management, and Addiction Medicine as well as Former Vice- President of Primary Care at Stormont-Vail HealthCare in Topeka, Kansas.  He has advised the Reagan, Clinton, both Bush and Obama Administrations and testified for numerous Congressional committees on addiction. He is frequently on the radio and is quoted in the media. Dr. Voth, FACP, belongs to the Fellows of the American College of Physicians, an honor of distinction for internal medicine.

Dr. Lev, a Fellow of the American College of Emergency Physicians,  is board certified in emergency and addiction medication.  She has 25 years of frontline experience in addiction treatment and is a frequent speaker quoted in television and print media.  She established the San Diego Prescription Drug Abuse Medical Task Force and then served as chief medical officer of the White House Office of National Drug Control Policy.  A mother of 4, she empathizes with families struggling with addiction.  Podcasts on her website, Hightruths.com, educate with leading experts on addiction.

Dr. Finn, board certified in Physical Medicine and Rehabilitation and Pain Medicine, edited Cannabis in Medicine: An Evidence-Based Approach.  He currently serves on the Executive Board and as President-elect of the American Board of Pain Medicine. He’s been practicing medicine since 1994 in Colorado Springs.   In the past, he served on the Colorado Governors Task Force on Amendment 64 and on the Colorado Medical Marijuana Scientific Advisory Council from 2014-2018.

Dr. Antley is board certified in Anatomic and Clinical Pathology and in Dermatopathology and is a Fellow of the American Society of Dermatopathology. She serves as laboratory director of Vermont Dermatopathology.  She organized a delegation of  Vermonters who went to Iceland to study that country’s program to bring down high addiction rates using their successful, science-based prevention model.

Other doctors lend their expertise

Here’s a video of the press conference:

So thank you to the IASIC Board, and to the following doctors for their contributions:

These proven consequences include psychosis, depression and suicide, violence toward self and others, domestic violence, addiction to marijuana and increased probability of addiction to opioids and other drugs, withdrawal, Cannabinoid Hyperemesis Syndrome, car crashes, cancers, sickness from contaminants, cardiovascular and pulmonary disease, neonatal development and stillbirth, and impaired brain development.

The Colorado Sun’s article, “Children’s Hospital Colorado declares mental health state of emergency as suicide attempts rise” was recently published, showing the urgency of marijuana education.  May the media take a fair and balanced view of this public health crisis before it is too late.

The data out of Colorado

Data out of Colorado is very clear that, since legalization, marijuana in its most dangerous forms became widespread among teens. Chemical addictions and overdoses on other drugs, such as opioids, have increased substantially, as Dr. Finn explained in a recent interview with Asia Pacific Today.    Past month use among youth 12 and older and youth addiction rates are substantially higher than in most other states.

On June 8,  just weeks after the group organized, the Colorado state legislature passed a bill to reduce marijuana damages.  If the governor signs the bill, two doctors will need to certify the 18-20 year-olds who get medical marijuana cards.  Also, an independent committee will study high potency marijuana and recommend potency caps on all forms of cannabis sold in the state.