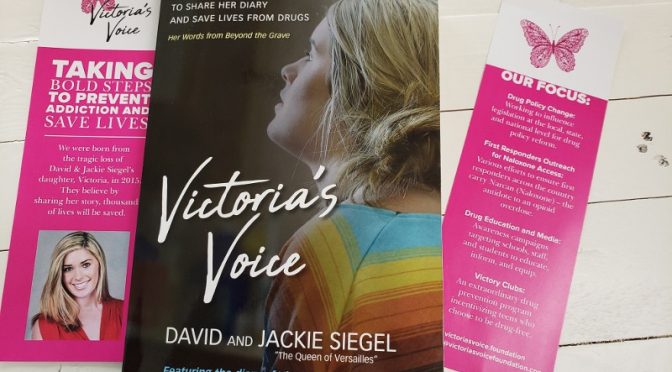 One of the wealthiest families in America was struck a blow in 2015 by the tragic overdose death of their eldest daughter, Victoria.

After Victoria’s funeral, the discovery of her diary opened up her inner life to them. For the first time, they realized how much their daughter was fighting against suicidal urges, in addition to suffering from self-esteem issues. They also saw in graphic drawings and raw, emotional words the grip drugs had on their cherished girl.

In 2019, in hopes of saving other children’s lives, Dave and Jackie Siegel published a paperback, Victoria’s Voice, which contains the actual pages of her diary. Robert Shapiro, a famous Hollywood attorney who also lost a son to drug overdose, wrote a forward to the diary. Two additional forwards follow, one from each of the parents, David and Jackie, who explain the backdrop of family history and their personal perspectives on contending with an addicted child.

Victoria entitled her diary, which starts around age 16, My Teenage Life in a Book. She died only two years after starting the account, at 18 years of age.

Victoria was artistic and her diary is full of elaborate doodles and drawings.  In the first few pages, two striking preoccupations emerge: she is already experiencing suicidal ideation, and she drew a picture of a girl doing lines of cocaine.

In the diary, she talks about her parents trying to help her, how good she was at fooling them, alternating with her desire to make her parents proud of her. Victoria loved her family and her parents loved her. The family’s many challenges of dealing with addiction is evident in Victoria’s words. What can other parents learn from reading about it?

As explained in her mother’s forward to the book, Victoria exhibited signs of anxiety and was bullied by other girls in her school. At age 15, she took her daughter to a psychiatrist, who prescribed Xanax. Her parents believe the prescription contributed to her problem.

The teenage party scene in Florida was very active. Apparently, all kinds of psychoactive substances had Victoria and her peers in their thrall. Rages, parties at Hookah bars and in hotels were mentioned in the diary. Marijuana, psychedelic mushrooms, Molly/Ecstasy, pills, cannabis edibles and teas, plus cocaine were lauded. We see from her diary that her drug use affected her schoolwork and behavior. She mentions being thrown out of school, and violent fights among friends, and even skirmishes with police. In one instance, Victoria punched her best friend in the face, giving her a black eye and got a bloody nose in return.

The specter of suicide runs through the book, and rears its ugly head in oft repeated, self-deprecating remarks like, “I’m nothing. Just useless. I have no point. So why the f**k am I still here? On this earth that’s slowly burning to ashes?”

The diary ends abruptly with the drawing of a bird with a frog head (looks remotely like a mushroom cap) and a marijuana leaf tale silhouetted against the moon. A second drawing on the page is of a beautiful dove flying into the center of the sun, and the chilling words Siegel Out.

The authors have assembled a helpful group of resources at the back of the book, A Guide to Abused Substances, How to Prevent Drug Use in Kids, and How to Spot Drug Use in Your Kids.

This book is highly recommended for families of pre-teens/teenagers, recovery experts and addiction medicine doctors and their staff. We need to be equipped to rescue more young people like Victoria. Once we know the inner voice of addiction, we will be better able to counter its narrative.

David Siegel, Victoria’s father is pledging to invest the rest of his life to end the scourge of youth drug use, and the family now carries on this important mission with the Victoria’s Voice Foundation.