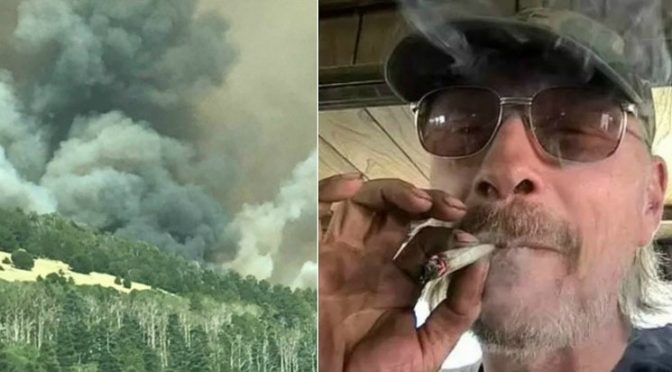 (We suggest that drug use, rather than political ideology, contributes directly to acts of arson. )

As in the case of mass shooters, the toxicology reports on the arsonists should be made available to the public. Everyone will benefit if we investigate and expose all the human factors contributing to fires.  We should see all the reports when people start fires, accidentally or deliberately.

Wildfires Where Marijuana is Probable Factor

One description of the Spring Fire of June, 2018 reads:

“Jesper Joergensen, 52, was living in the woods east of Fort Garland on June 27 and told investigators he was using a fire pit to cook some meat the night the fire started, according to an arrest affidavit. He told law enforcement he swirled the contents of the pit after smothering the fire and didn’t see any smoke.

Joergensen said he believed the fire was out and went to take a nap. He told investigators he did not pour any water on the fire, the affidavit said.

When Joergensen awoke, sage bushes about 20 feet away were on fire, the arrest report said. He reportedly tried to smother that fire with a blanket, but when the blanket caught fire he just tossed it into the flames.”

Joergensen’s actions and state of mind suggest the dilemma of pot users who are cooking and camping. Are they too impaired to avoid fires and actions that cause extreme harm to people and the environment?  A man from Denmark who overstayed his visa, Joergensen posted prolifically on Facebook about marijuana. At this time, he is still too incompetent to stand trial.

In 2003 the Cedar Fire ravaged through San Diego County, California and made history as the second largest wildfire to impact The Golden State. The fire burned 273,246 acres, destroying over 2,400 homes in the process. After being separated from his hunting partner Sergio Martinez, a West Covina based hunter, started a signal fire in hopes of being rescued. When did not arrive, he set another fire. The new fire got out of control, with embers flying as he tried to swat it down.

Investigators looking into the fire found Martinez’s glass marijuana pipe about 30 feet from the spot where the fire had started. After failing to take responsibility for starting the fire, Martinez expressed concern that authorities might find a marijuana cigarette in his truck. They say actions speak louder than words, and Martinez’s concern for pot and lack of empathy for the victims immediately after the fire speaks volumes on his impaired state of mind at the time. To this day San Diego County feels the effects of his marijuana impaired actions.

Another large wildfire, the Soberanes Fire destroyed parts of Monterey County, California in 2016. At the time, it cost about $236 million to suppress, making it the most expensive wildfire to fight at that point. Investigators believe it was a result of an illegal campfire in Garrapata State Park. However, as more illegal pot grows are found in forests, one must note that these encampments can pose a fire hazard. Did illegal pot farms play a role in spreading the blaze? One thing’s for sure: the more marijuana grows present the more likely California and other western states are to experience a rapid fire spread such as the Soberanes wildfire.

The looming tragedy of homelessness

Certainly thousands of people will be displaced by this season’s fires.  Many of them may end up homeless, a human tragedy.

The cost of housing may keep some people from finding adequate shelter on the west coast. However, as more homeless people camp up and down the coast, we must consider other factors leading to homelessness.  Do people flock to west coast cities like San Francisco, Portland and Seattle for the easy access to drugs?   Do some of the people who go the West for drugs choose living outdoors, rather than in homeless shelters that ban drug use?  If this continues, will their actions endanger the rest of us?  Our freedom comes with a price, but it shouldn’t include the price of massive damage from those who use drugs.

For another view on the fires in Oregon, listen to the 44th and 45th Dark Horse podcasts