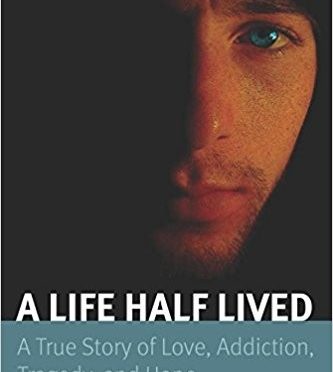 A Life Half Lived is wonderful biography and memoir by a father who lost his son in a tragic car accident. Darryl Rodgers’s love for his son Chase shines through on every page of this book.  Chase made some bad choices about substance abuse, the company he kept and the final decision about getting into the car with an impaired driver.

As the father explains, Chase packed forty years of life into twenty years.  The book is so engaging that the reader doesn’t want to stop. When Darryl wrote the book, it appears he was trying to figure out where he went wrong, or what he could have done differently.  Chase was a very active boy, loved sports and had a lovable personality and great sense of humor. He was always looked for adventure, but he was not a kid who spelled trouble. There was nothing unusually difficult about him, so the clues it would end this way just aren’t there.

The book reveals that even the best parenting is not a match for today’s culture.  From the start, Darryl was an active participant in Chase’s life and encouraged the development of his potential. He had good communication and an intact marriage. Parents of teens should read this book in order to understand what our kids are up against today.

The marijuana, other drug connections

Darryl clearly indicts marijuana as the substance that prevented Chase’s maturation process and affected his poor decision making. Chase smoked marijuana the day he died, and THC metabolites were in the blood of the driver who killed him. Yet for some reason, marijuana continues to get a free pass as many policymakers claim it’s harmless.  Marijuana is often not recognized as part of the mix in our current addiction epidemic, although it is a vital part of the mix.  Nearly all of today’s drug users are poly drug users.

As we often hear, no one starts out expecting to become addicted to drugs. The book reveals how quickly addiction can take over a person and how unexpected it can be. Darryl hopes that teens who read the book will decide not to experiment with drugs.

For parents, Darryl hopes they can learn from his mistakes. Yet it’s hard to call Darryl’s very reasoned parenting wrong. As a father, he mixed empathy and understanding with equal parts of tough love and letting go. This dad did everything possible to help Chase, without coddling or enabling him.

One thing the author admits he should have  done differently — not allowing Chase to play video games so much.  Although he doesn’t go into detail about it, video games are very addictive. One wonders if those games which encourage obsessive, addictive behavior prime youthful brains for substance addiction, too.

Warning signs, advice for others

It’s hard to tell the difference between ordinary teen behaviors and actual drug abuse.  Were there clear warning signs of Chase’s drug abuse?  Not really.  For this reason, all our children are potential victims.  We must adapt to a world in which drug use has been normalized.  It took only three short years between the time Chase started using drugs and the time he died.

The book describes the intervention process: how he set it up and the particular friends and family members who got involved and why.  A very large group was necessary,  because denial is a huge part of addiction. It’s this type of advice that desperate parents can learn so much from Darryl’s experience.  If you need an intervention, this book offers good insight into how to handle it and what participants can say.

What about treatment?   Chase Rodgers was in treatment for one month and even lived in a halfway house afterwards.  The sad truth is that once a brain has been hijacked by substance abuse, there’s no guarantee of getting that brain back.  So there’s big room for improvement in our treatment standards.   With the addiction problem so broad and pervasive in this country, it’s hard to believe that improvements are coming any time in the near future.

Parents would do well by doing their own research on the treatment centers, rather than relying on the places suggested by an interventionist.  This book clearly explains why.  Darryl preferred a different treatment center for his son, but allowed the interventionist to sway him.  Any family with an addicted individual who’s in denial can learn from Darryl’s story.

We give the book five stars.

(Editor’s Note – A well-financed, powerful group called the Drug Policy Alliance and its PAC, Drug Policy Action, seeks to diminish the legal consequences for using and selling drugs. Unfortunately, it’s impossible to do this without increasing drug use, leading to more drug deaths which grow by leaps and bounds each year in the US. These groups want a strong say over our nation’s drug education message, but their message is that drug use is normal and without intrinsic social, mental and biological harms. We have not succeeded in reducing the harm of drug use. Changing legal consequences for using drugs doesn’t change the power of the drugs or the nature of addiction.)