If we want to prevent incarceration we need to prevent drug usage.  Misconceptions, like the one Sanders was endorsing, has fed a movement to empty federal prisons, because people have been given the wrong impression that drug abuse is a victimless crime.  The term “non-violent drug offenders” is an alternative way of referring to drug dealers, not a person caught with a joint.

Sanders suggested he would vote to legalize marijuana in Nevada. Legalization would run counter to Sanders’ idea of erasing income inequality. Marijuana legalization would increase income inequality, as masses of people will become less competent and under-employed. It’s already happening in the cities with a marijuana markets: Denver, Seattle, Los Angeles and San Francisco.

Sanders needs to do his research.  He made it clear that he doesn’t like big pharmaceutical companies, but wait until he learns about BIG MARIJUANA, which takes its lessons from Big Tobacco.  Does he know that today’s marijuana is much like a GMO?

The US has 60% of the world’s drug users –- users of both illegal drugs and legal drugs used illegally –and the US has one quarter of the world’s prisoners. There is a connection. Gil Kerlikowske, former police chief of Seattle and head of ONDCP from 2009-2013 said that “The way to unburden the Criminal Justice System is to acknowledge the link between crime and substance abuse.”

Both Republicans and Democrats have said they want criminal justice reform. However, instead or working on it step-by-step with sensible reform, the political push is to use drastic measures like legalizing marijuana. On the other hand, it would not be hard to put in reforms that many people would agree with: ending harsh mandatory minimum sentences, three strikes laws or jailing those who flunk a drug test while on probation. 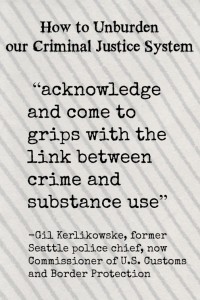 What about incarceration and disparities in the justice system?  The only way to end widespread incarceration is to address drug abuse. There’s no reason why we can’t put drug education back in the schools. DARE has been out of many school districts since the late 90s, and it hasn’t been replaced. No wonder the United States has such a problem. Sweden would be a model to follow, since that country has brought down youth drug use to very low levels, about 5%. (Hilary Clinton was right, though, that the US is not like Scandinavia, and is more multi-cultural.)

Drug Courts that help addicted criminals get treatment are widespread. Drug courts are a portion of the War on Drugs that the marijuana lobby doesn’t like and so pretends they don’t exist. Civil rights attorney Dave Evans explained how plea bargains distort the picture and give the pot lobby a chance to present the wrong picture.

There is no better way to prevent crime and violence than curb drug abuse.  According to Ed Gogek, MD, an addictions doctor who has spent years working in prisons, “Drug abuse is not a victimless crime. Actually, there is no crime with more victims. Most violent criminals, most child abusers and most domestic violence perpetrators are substance abusers. In fact, about 80% of all crimes are committed by those under the influence of drugs and alcohol.”  Gogek’s book, Marijuana Debunked mentions a person who went to jail just for pot –only after the police had been to his residence nine times in response to neighbor’s complaint of doing it in front their kids.  Gogek explains that it is that only if you disrespect people or flout the law continuously, a joint could send a person to jail.

See our other articles on teen violence, child abuse and domestic violence, all relating how marijuana contributes to these problems.

(Instead of listening to Sanders on marijuana, our youth can follow the example of Bernie Sanders and Hilary Clinton who rejected marijuana in the ’60s–when it was about 1% THC.  It has helped Clinton and Sanders maintain their minds, passion and strength to this day!)