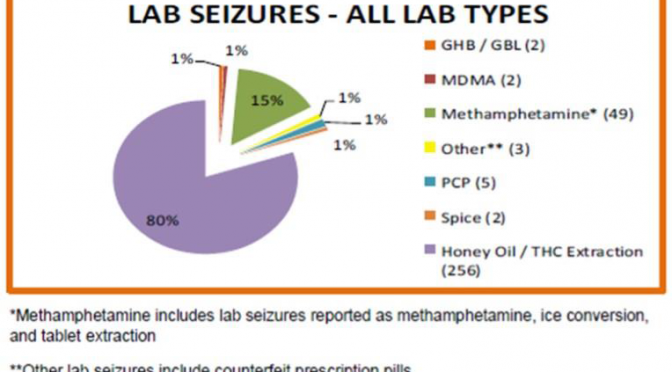 Eighty percent of the drug labs in California are marijuana labs, while only 15% are meth labs.  In the chart above they call it honey oil/THC labs.  That is the name given to it in California, while in other states they call it “hash oil” or “BHO extraction.”  The term “honey oil” sweetens the pie and disguises how dangerous it is.   We know of at least 50 deaths from BHO Labs, including that of Fire Chief Michael Fahy in the Bronx last fall.  Amateur chemists set up these labs to extract THC from the scraps of marijuana.  They use highly flammable butane.    Although it’s legal for some dispensaries to make, at least two legal dispensaries have caught on fire.

The chart above is taken from the California HIDTA Report from 2016.    They found 256 marijuana labs in the state in 2015, although these operations are completely illegal.   Check out our many blogs about these fires and the disasters they cause.