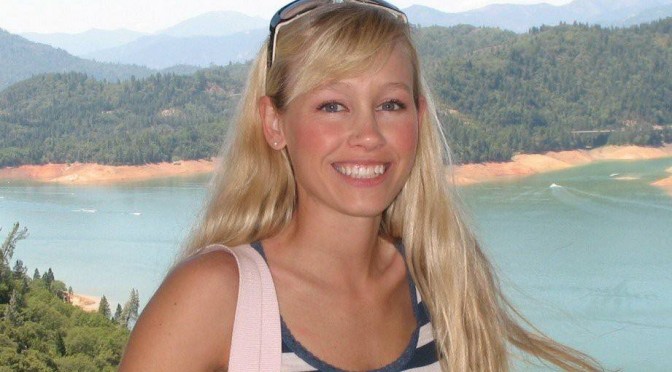 It’s always sad when a young person is missing but when it involves a mother with two little children, it’s more than tragic.    From all appearances it would seem Sherri Papini had a wonderful life, good husband and two young children.  She went missing in broad daylight while jogging on the Oregon trail on November 2, right before she would have picked her children up from preschool.

Her husband Keith Papini took a lie detector test and has been cleared of any wrongdoing.  Using an iPhone app, he had found her mobile phone, headphones and a few strands of hair before reporting her missing.   The story has been featured on ABC News.

An online report tells of teens and young women who have been abducted in the Redding/Shasta County area.   Papini looked younger than her 34 years.  The long blond hair, pretty face, slight figure, etc. would make her perfect for type of people marijuana growers happen to victimize.

Following news reports from the area, the most logical conclusion is that she was abducted in connection to the marijuana industry and the sex trade that is rampant in Northern California.  Papini lived in was in Mountain Gate, at tiny town outside of Redding, Shasta County, an old logging area that has seen much violence in recent years as a result of the marijuana industry.

Since search crews have combed the Shasta County area, her family believes she is out of the region at this time.   It would not take much to bring her into the Emerald Triangle, of which Trinity County adjoins Shasta County.   Both Humboldt and Mendocino County would be logical places to look for her.

The abuse and sexual trade in the region has been reported by Reveal and Cosmopolitan.  Marijuana grows and sexual abuse hide easily in this heavily forested region.

Although Shasta County is not part of the Emerald Triangle, it has a similar geographic and economic situation.  Shasta was formerly part of the logging industry which has been largely shutdown.  When an industry feeds the economy is no longer viable, residents must look for other ways to earn a living.  Too much of Northern California has been taken over by the marijuana growers who now supply 60% of the US marijuana market.

Let’s hope the Sherri Papini is found, and found alive and well and comes home to her family.   The family has set up a Facebook page and a reward.   (Above photo from Facebook)