For more information, download this brochure from Narconon.  Even if you smoked pot 20+ years ago without harm, today’s situation is different.  We want our children to avoid marijuana because they care about the risks in marijuana itself.  Here’s the facts for raising your children today:

* Marijuana has been modified since 1994. The THC, which gives the high, is 3-10x stronger in the plants of today.  If a child begins using today’s pot , it’s like to learning to drink with grain alcohol, instead of beeror wine.  Also, youth today frequently use the potent “dabs” “wax” and “budder.”  These are extractions can have 40-80% THC.

* Marijuana is addictive, contrary to a popular myth, particularly with today’s stronger strains of pot.

* In states with medical marijuana, teen usage is much higher than in other states, and many teens who use pot get it from some marijuana cardholders.

* Those who begin in adolescence or their teens, have an addiction rate of 17 percent, as opposed to 9 percent for those who begin using marijuana as an adult.

*Emergency Department hospitalizations from marijuana rose from 281,000 to 455,000 between 2004 and 2011, making it 2nd amongst the illegal drugs causing ER treatment.

* Individuals responses to marijuana can be vary greatly, and the potential for paranoia and psychotic reactions are real side effects, omitted in the pot propaganda.

* Marijuana is fat soluble and stays in the body for weeks, which is why some people have flashbacks.

* The  brain, which is 1/3 fat, isn’t fully developed until age 25 or later, and until it is, marijuana can cause irreversible damage.

* Marijuana is not as widely used as alcohol,  6-7% of the adult population, vs.  66% who drink, one reason the comparison doesn’t work.

* Marijuana usage causes traffic deaths and it is not safe to combine with driving.

* More teens seek substance abuse treatment for pot than any other legal or illegal substance.

* Marijuana is a gateway drug,  because nearly every young person who develops a drug addiction begins with marijuana.  Early pot users such as Robert Downey, Jr. (age 9), and Cameron Douglas  (age 13), prove that the stranglehold of drug addiction lasts for years.

* A multi-year study out of New Zealand, tracking marijuana users and through their mid-30s showed IQs decrease an 6-8 percentage points over time.  Again, we point to the medical studies summarized on this webpage.

* In a recent study, schizophrenics who have used marijuana had an onset of the disease 2-1/2 years earlier than those who did not use marijuana.

* Marijuana can trigger psychotic symptoms and/or mental illness, and cognitive decline in youth, more quickly than alcohol, while tobacco does not.

* Since marijuana usage increases the odds of developing a mental illness, expansion of pot will expand mental health treatment needs.

* Marijuana usage is associated with greater risk for testicular cancer in males.

* With universal health care, all of us will pay for the increase in medical care for those needing help from pot abuse.

* The number of pot-related hospitalizations in Colorado accelerated in 2009 and went out of control in the the first half of 2014.

* Existing mental health issues, such as ADHD, anxiety and depression, greatly increase the use of drugs for self-medication.

* The National Alliance for Mental Illness lists four illegal drugs which cause psychosis: cannabis, LSD, methamphetamine and heroin and two classes of legal drugs, amphetamines and steroids. Pharmaceutical drugs are sold with warnings, while marijuana isn’t.

Sharon Levy, Chairwoman of the American Academy of Pediatrics committee on substance abuse, said “We’re losing the public health battle” and policy is being made by legalization advocates who might be misinformed about marijuana’s dangers.” 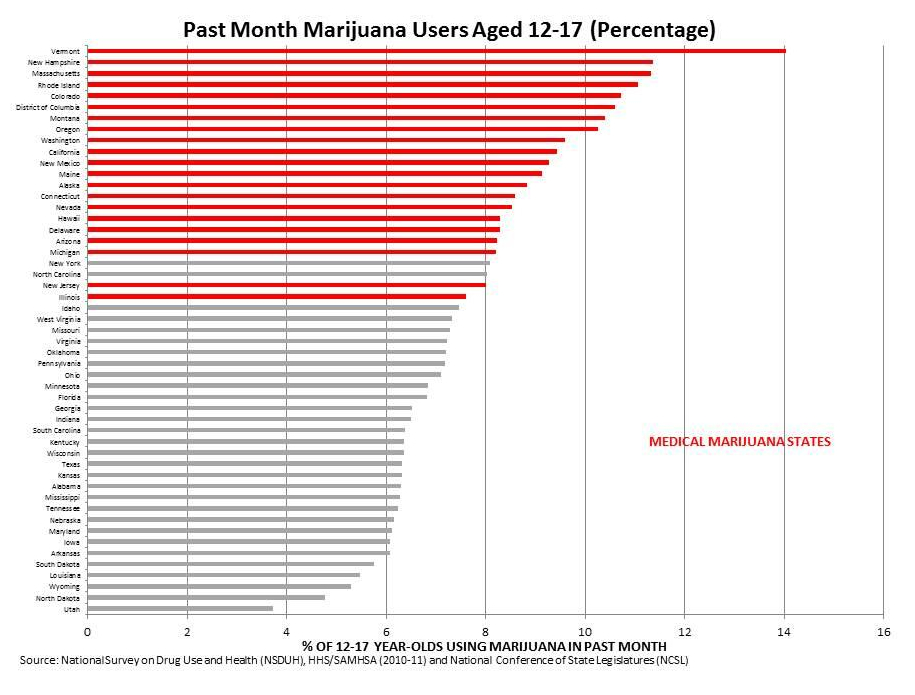