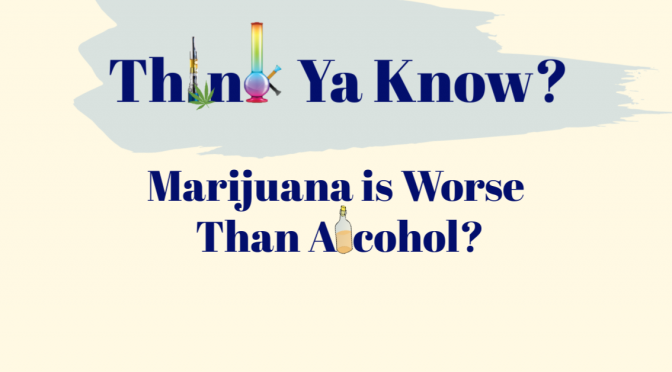 1) According to a report in 2015, 30 % of marijuana users in the United States qualify as having Cannabis Use Disorder, vs. 10-20% of those of drinkers who are alcoholics.

2) A study from the University California, Davis found that in terms of downward social class mobility, financial difficulties, antisocial behaviors in the workplace and relationship conflict, cannabis dependence was worse than alcohol dependence.

3) With THC (most psychoactive part of pot) as high as it is today, there is no equivalent to dope that is like beer or wine. Since competition between growers has created the higher THC,  consumers won’t go back to the weak, old-fashioned pot that was in existence before the “medical marijuana” scam was introduced in the mid-90s. Average THC in Colorado is 20% vs. 1-3% in ’70s.

4) Frequent users of marijuana are more likely to have a-motivational syndrome, compared to frequent drinkers.

7) Both are readily available to children and teens. Pot is more available in marijuana states, as the parents may have it at home.

8) Both are dangerous for driving, and both have led to traffic fatalities, particularly when the drivers are age 25 and under.   Looking at the absolute evidence takes away any need for studies to show that driving stoned is dangerous.

9) Marijuana stays in system longer, up to a month and even more for chronic users, while alcohol goes out of the system in 24 hours.  Some marijuana users experience flashbacks which can be very dangerous while driving or when they come on unexpectedly.

10) There are high-functioning alcoholics and there are regular marijuana users who hold jobs and function reasonably well.  The latter is less frequent, and those who manage well tend to give an erroneous impression to others who become addicted quickly and show a greater impairment from using pot.

11) Both marijuana and alcohol are depressants.

13) Marijuana advocates claim it is “harmless” and “not addictive,” both false claims.  They also claim to drive better while stoned.  Drinkers , on average, are not so delusional in claiming that alcohol is harmless and non-addictive.  Individual problem drinkers may deny that they have a problem, while pot activists deny marijuana is a problem.

14) Binge drinking in very, very heavy doses can lead to death. While marijuana doesn’t go into the brain stem, in heavy doses it can lead to psychosis.  Pot has been know to cause death for those who have a psychotic reaction to marijuana, or heart arrhythmia or cannabis hyperemesis syndrome.

15) You can’t smoke or vape alcohol, so it doesn’t carry the sames risks to your lungs that marijuana does.

16) Marijuana doesn’t cause a hangover.  Skipping the headache is not a good reason to do pot.  Just don’t drink or drink less.  😉

For another view of this issue, read When a Lie Travels: Comparing Alcohol to Marijuana.  Read another article we wrote on marijuana vs. alcohol.

No one is forced or compelled to drink, another falsehood promoted by the marijuana lobby.  Many adults choose not to drink or do any drugs.   More power to them.

About 10-14% of the US uses marijuana, compared to up to 60% of adults who use alcohol.  Evidence shows that marijuana users drink more alcohol, too.