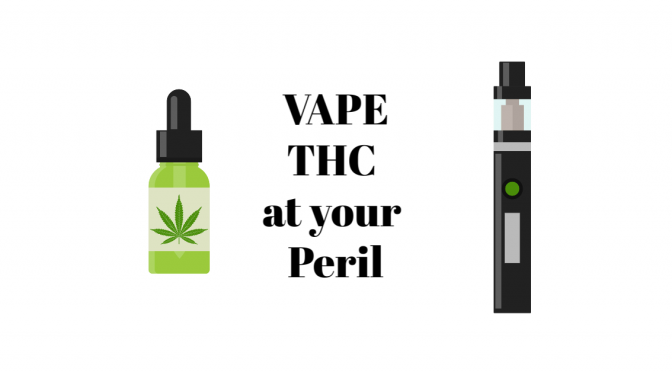 A CDC report issued October 28, 2019, tells of staggering numbers of lung illnesses (1604) and  deaths (36) caused by vaping.  It also reveals that the majority of victims (63%) were vaping THC with cannabis vaporizers .  Vaping is widely perceived as a safer alternative to smoking tobacco. However, teens and adults are increasingly using it as a means of delivering the THC high. By November 1, there were 1,888 confirmed and probable cases of the respiratory illness and 39 deaths.

Now that deaths are being reported, we must take a pause while trying to discover the exact cause of the danger.

Consuming THC and CBD via a vape pen is aggressively promoted by the marijuana industry.  Dispensaries push it as a discreet, clean and easy way to use these drugs. The vaporizer pen and other vaping devices are relatively new.  Young people, who adapt easily to new technologies, eagerly embraced this craze. Because vaped marijuana has no detectable odor, it’s easy to camouflage use in school, at home or in the workplace.

USA Today reporter Jayne O’Donnell is following this crisis closely. Her article, How Patchwork Regulation on E-Cigarettes Led to the Vaping Crisis, clarifies the issues. O’Donnell explains that the CDC and FDA are warning consumers against vape products, while they investigate causes of the illnesses.  In a subsequent article, Vaping Devices Under Scrutiny, she details components of the vape pen. She shows how the technology itself may be contaminating the vapor with heavy metals and other toxins. The lung health risks may be posed by the heat, atomized oils, chemical additives, liquids, metals, and THC according to the experts she interviewed.

State and federal governments are making an effort to curb the vaping trend, by implementing bans on flavored vaping oils. These flavors may hold a special appeal to young smokers. But, since the majority of these deaths occurred while vaping THC, Parents Opposed to Pot would like to see a total ban on THC and even CBD vape products, both of which are federally illegal drugs.

A recent case in Florida is a cautionary tale about vaping flavored CBD. A woman vaped mango-flavored CBD  bought while on vacation and ended up with multi-organ damage. She was so sick and, because of blood clots in her legs, the doctors had to amputate both legs to save her life.

Even without taking into account the additives and reactive metals in these vaping devices, it is evident that cannabis oils are a hazard to the lungs. We also know that this toxic drug causes a cyclical vomiting illness, Cannabis Hyperemesis Syndrome. It is well established that marijuana is a hazard to mental health.

Parents Opposed to Pot recently published a video which asked citizens to raise their voices against the pro-marijuana industry bill, The Safe Banking Act. This bill deserves to be defeated because of how it would increase the vaping crisis.

For those of you who want to see a lengthy presentation about vaping, this is an excellent academic lecture on Vaping by Dr. Aaron Weiner who looks at this emerging trend among college students.