Drugs outpace alcohol as a primary factor in DUI fatalities.  In 2016, 44 percent of fatally-injured drivers tested positive for drugs—up from 28 percent in 2006. Alcohol DUI fatalities dropped from 41 percent to 38 percent. Of all the drug impaired fatalities, marijuana was present in half of these.

According to a law firm specializing in bicycling accidents, almost 25 percent of all DUI accidents are caused by marijuana impairment.    This problem is worse in states that have legalized marijuana.

In legalization states, the justice system excuses drivers under the influence of marijuana much more readily than they excuse drunk driving. Marijuana lobbyists take advantage of the fact that it’s far more difficult to test and deter stoned drivers.

Children no longer safe on their bikes

Marijuana impairs drivers because it affects vision and leads to inaccurate perception of depth.  With more states planning to legalize marijuana, children face greater risks when riding their bikes.  Reviewing the cases of some children killed by stoned drivers proves the point 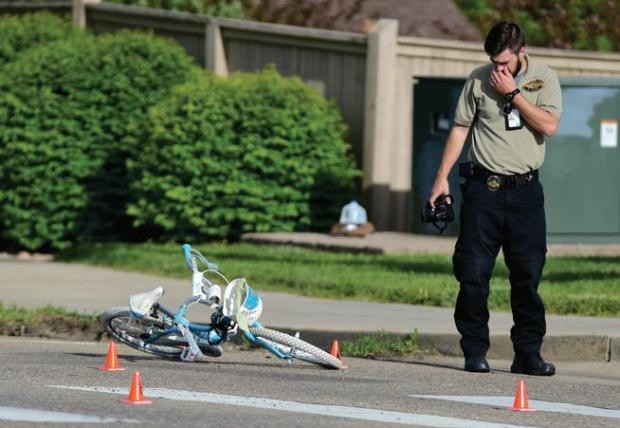 Scene of crash that killed 8-year-old Peyton Knowlton in Longmont, Colorado, May 20, 2016. She was riding home from school with her stepfather.

Peyton Knowlton, 8, of Longmont, Colorado,  was riding her bike home from school in May 2016.  A 20-year-old driver who used  pot struck her, and she died.  Although the driver was impaired and he had used pot, he only had to serve 150 days in jail.

But Peyton’s stepfather, who was riding with her at the time, spoke to John Ferruggia for the PBS show, The State of High (watch the video here).  The 5-nanogram limit Colorado uses for judging impairment is not an accurate measure, as the program explains. The driver’s measure had gone down, because of the time delay to get a blood test.

Last summer in Michigan, five-year-old Blake Huffman rode his bike out of the driveway. A 33-year-old delivery driver, a daily marijuana user, crashed into him and killed him. She pled no contest to attempted operating under the influence causing death. Despite the family’s loss, the judge sentenced her to only 11 months in jail.

In 2012, a stoned driver killed Carter Vo, an 9-year-old boy riding his bike on the sidewalk in Skokie, Illinois.  In 2013, a judge sentenced the 23-year-old driver to five years in prison. She said that Carter’s death could not be called an “accident,” because the driver had smoked marijuana before Carter died and her choice was deliberate. At that time, before decriminalization, driving under the influence of pot was treated comparably to alcohol DWI. It’s no longer the case.

Other notable bicyclists who died

Janice and Mark Wendling of Morris, Illinois, died when a teen who drove under the influence crashed into them. The 16-year-old driver threw his bag of marijuana out of the car. With Illinois’

decriminalization law, legislators raised the DWI threshold for marijuana impairment from 0 to 5 nanograms of THC. The driver had 2.8 ng at time of testing, but police only charged him with failure to reduce speed. The crash occurred on June 21, 2016. The new law would take effect on July 1, 2016. The 16-year-old, who had a past record for unsafe driving, got away with two murders.

In Vermont, a 17-year-old stoned driver hit and killed Richard Tom, an experienced cyclist, back in April, 2015. Both Tom and the teen driver, who had 36 nanograms of THC in his blood, died instantly. Richard Tom worked for VBT Vermont Biking and Walking Vacation.

Kallie James, 19, who was driving under the influence of marijuana on November 24, 2014, in Puyallap, Washington. She critically injured Pastor Eric Renz who was on his bike, riding between the two homeless shelters where he worked. Two weeks later, he died.
She used both marijuana and Paxil, an antidepressant. Marijuana doesn’t treat depression, and her situation reminds us that having age limits in legal pot states doesn’t reduce teen usage. Pastor Renz was a well-respected community leader.

We have blogged on this subject previously, bicycling can’t be safe with stoned drivers on the road.

“Because marijuana impaired driving fatalities peak during the peak travel hours and shortly thereafter, both pedestrians and bicyclists are more likely to be killed by stoned drivers than drunk drivers,” according to Phillip Drum, PharmD.  “Peak time for fatalities from only alcohol impaired drivers is late at night (when the bars close) and not many pedestrian and bicyclists are on the roadways.”

There were at least two other bicycle crashes in California in the last two weeks. Read hit-and-run driver strikes kills woman on bicycle in Hollywood, Oct. 25, and bicyclist dies after being struck by 2 cars in North Hills, Oct. 19.   Bicycling on roads is dangerous regardless of drug use, but it gets worse with more drivers impaired by THC.