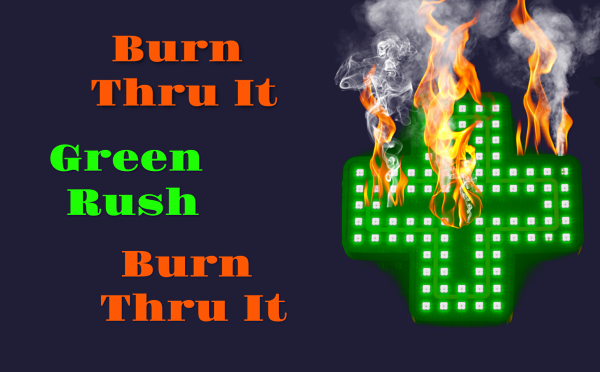 Quite the evangelical in the Cult of Cannabis, I would do anything for this opportunity to work in a dispensary.  But I should have known better.   When I researched the Corporation prior to my interview, I read that the founding Colorado CEO had to step down once it was discovered that he had lied on the application.  The Corporation’s CFO, who was an ex-credit card marketer and did not use marijuana, then became the new CEO.  The Corporation founded on an untruth did not bode well and there was cause for concern, but I discounted those thoughts and went to the interview.  Should I just burn thru it?

At the interview, the Corporation stressed that it was the “best of the best” of “medical” marijuana dispensaries.  I walked away with the impression that this was a prestigious, caring and altruistic organization.  The Corporation certainly had sufficient financial backing that was reassuring.  There were over 800 applicants and I was 1 of 25 who stood out, made the cut, and was hired. 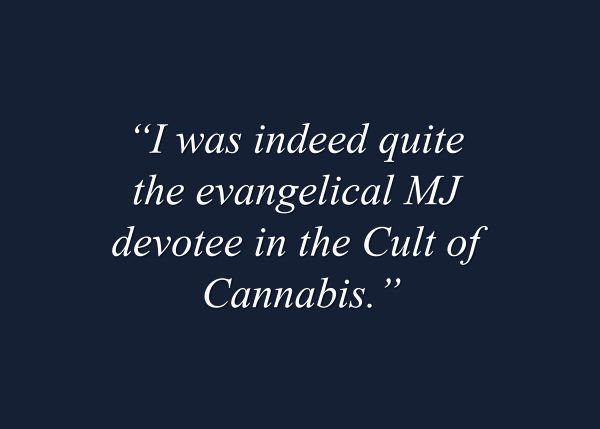 Before starting work, and giving up my job as a Physical Therapist,  I completed my pre-employment paperwork. The last document I signed was a 5-page Non-Disclosure Agreement.  This intimidating document threatened me with a $100,000 fine and criminal prosecution. I experienced a queasy feeling in my gut reading it.  Was this really necessary for a $15/hr. budtender job?  However this was my dream job, my destiny, so I discounted my intuition and signed.

Part of something greater than myself

Those early days in the dispensary were truly amazing.   I felt that I was a part of something far greater than myself, like I was on the ground floor of mankind’s great awakening.  When we opened, patients emotionally would tell me how much it meant to them that marijuana was now legal. Of course I empathized.  The Corporation explained that there were people and industries against “medical” marijuana, explaining away any current and future bad press.

On opening day, the dispensary had no non-THC (high effect) products.  Where the heck was the CBD?  CBD (cannabidiol) is non-psychoactive (provides little to no high) and is known as the therapeutic cannabinoid of the marijuana plant, compared to THC.  Why did my Corporation focus on high THC products, and put a 34% THC flower on the opening day menu?   However, not many patients asked about the CBD.  In fact the, the products with the highest THC level available always sold out first.

Most of us budtenders were also “medical” marijuana patients. We noticed that products such as the vaporizer cartridges tasted terribly and made us cough. The first three months we noticed that the buds were not what we were accustomed to — small, hard and harsh tasting.  I thought that the guys at the cultivation center were terribly clueless growers.  I didn’t know what their problem was, but management told us repeatedly that the flower would improve soon.

However, instead of improving, month after month the bud had a worsening harsh chemical taste. Patients, co-workers and I began to experience headaches, allergic reactions, wheezing, rashes, dizziness, itchiness, and respiratory infections after smoking and vaping it.  All of us had nausea and irritability, but of some of us also had numbness of our tongues.

I began working in cultivation

The Corporation determined it could provide better customer service, if we had the “opportunity” to work in the cultivation center. The first day I worked stuffing the pre-roll joint cones.  Of all the products we sold, patients at the dispensary complained the most about the joints, and though all joints had 1.2 grams printed on the label, they actually ranged in weight from .75 to 1.9 grams.  I was given 2 bags with different batch numbers and told to put some of each into a blender. This was a cause for concern for each of the marijuana bags had a different batch number, meaning different plants and different testing results.

I was not impressed by this romper room production of joints.  By the end of the day my face was itchy and my breathing adversely impacted, however I fared much better than my co-worker whose job it was to pack marijuana in the machinery for BHO (Butane Hash Oil/concentrate) production, resulting in a crimson, inflamed rash on the entirety of his face and neck.

Day 2 for me in the cultivation center was trimming.  I found powdered mildew/mold on many of the buds of the first cut plant I held.  Given that this was supposed to be a “medicine,” I presumed that the plant would be put aside and destroyed.  If contaminated, these buds would be hazardous to human health and potentially lethal.  I approached the harvest supervisor.  She told me to “cut around it (the mold)” and to put the moldy buds aside as BHO production would “take care of it.”  I spent the next 8 hours trimming moldy plants without being given a mask for protection.

Breathing problems, rashes and other issues

By the end of the second day I couldn’t breathe, after trimming all those moldy plants.  My respiratory issues continued for awhile.

Co-workers at the dispensary shared their respective work experiences at the cultivation center.  Several employees had viewed stalks of marijuana plants being dunked in barrels of hydrogen peroxide.  I was quite alarmed with this information and approached management with my concern.  At a staff meeting, the Colorado ex-CEO, now a “Consultant,”  told us that use of hydrogen peroxide on marijuana is an “industry standard.”   (Editor’s Note — Two days ago an article appeared in Vermont Digger, As medical dipsensary struggled with mold, regulation was nonexistent.)

We budtenders started to notice moldy flower in the bins.  When we approached management, we were told to pull out the moldy flowers and sell the rest.  This was cause for concern for any visible mold on buds means that the entire bin is contaminated.  Patients also bought and returned moldy bud to me at my counter, and when I voiced my concern, management told me the patients “must have done something to make the flower moldy.”

I started to notice other unsafe practices.  Sometimes containers for two joints would have their lids inadvertently switched, resulting in patients ordering a high CBD/low THC strain receiving a high THC/low CBD strain and vice versa.  If this was a true “medicine,” we were giving patients the wrong prescriptions. However we did nothing to alert the patient of the error.

We were told that the state labs could not adequately test edibles, so in actuality the kitchen had to put in up to double the amount of concentrate in order to get them to test at certain potency.  We were instructed not to divulge this information to patients.  How the heck was this true “medicine,” if the actual potency put into the product was far higher than the printed potency on the product label?  I started to worry about my elderly or “less experienced” patients overdosing on an edible. 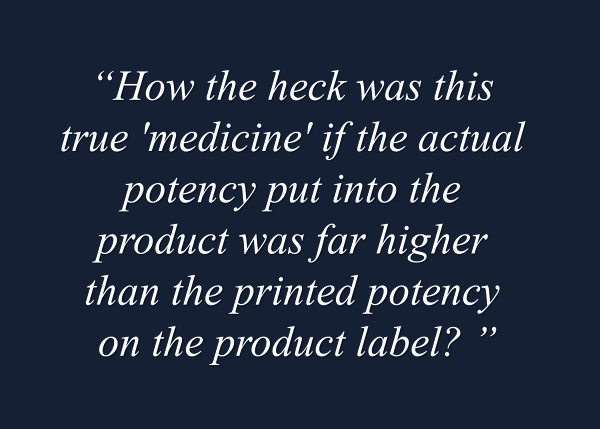 Getting the crystalline hemp

Purist budtenders like me were horrified.  As a “medical” marijuana dispensary, patients expect us to grow the marijuana plant to make our CBD products.  Now we were outright ripping off patients. Our products were expensive, and hemp CBD products can be purchased at health food stores for a much cheaper price.  Patients were presuming what I had once believed, that our Corporation’s products were the highest quality plant based “medicine”; after all, the Corporation touted itself to be “the best of the best” of “medical” marijuana dispensaries.

Though I perceived my Corporation’s unethical behavior, I did not perceive it as harmful, for all products had passed the supposedly “stringent” lab testing.  I was losing faith in my Corporation, but not in the Commonwealth of Massachusetts, renowned for its overregulation.

One morning in a meeting, two budtenders in their 20s described acute onset of adverse neurological effects after ingesting the “synthetically -derived hemp crystalline” CBD edibles.  One described going into alarming convulsions, and the other experienced onset of an intense headache and TMJ pain that continued to remain present.  How could this be?

“Burn thru it” and make the most of your “medicine”

Management immediately discounted what they said by laughing if off and saying, “Our medicine helps a lot of people.”

We budtenders learned that those who continued to voice concern about questionable and unsafe practices were targeted and terminated. So I was silenced and afraid, trapped by the Non-Disclosure Agreement that threatened me with a hefty fine and possible incarceration. 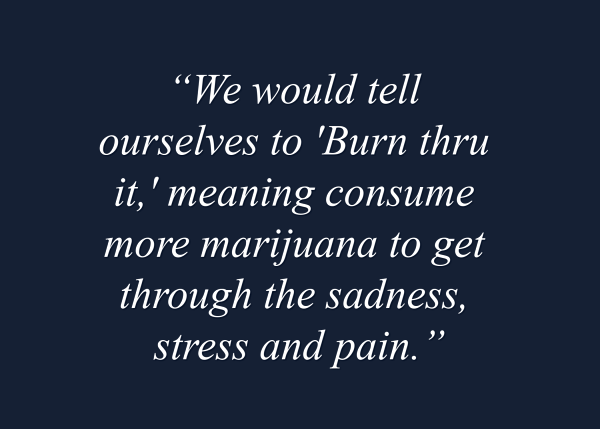 “Burn thru it” – put oneself into a marijuana stupor, numb out and forget.  This was perfectly in sync with the Corporation’s promoting and pressuring dispensary workers to consume marijuana.  We would receive products for $1 and be berated for not consuming and providing feedback to the Corporation’s lab ASAP.  We were their guinea pigs. Working for a chaotic and hostile work environment that pressured use of its marijuana, I didn’t perceive how much harm I was doing to  myself.  (Read Part 3, A little dab will do you, Part  4, Investigating and Reporting and Part 5: The Marijuana Emperor)