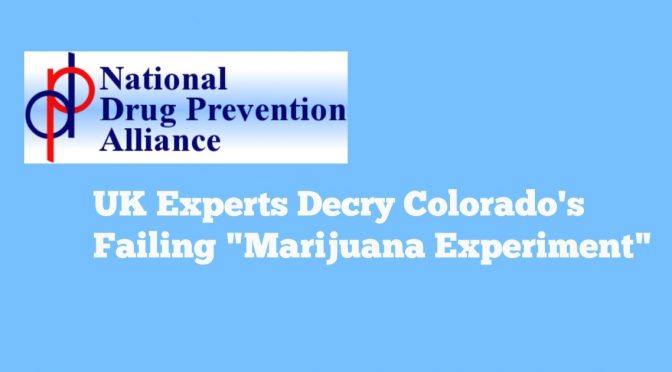 By Peter Stoker, National Drug Prevention Alliance   As members of the worldwide drug prevention movement, the National Drug Prevention Alliance (UK) has been greatly saddened to see how the United States of America has allowed marijuana to be available in so many places for so-called medical and recreational purposes.  This far from harmless substance causes pain and hardship to individuals, families and communities.

(Should you wish to inform yourself more on marijuana, may we respectfully suggest that you log-on to www.drugprevent.org.uk where you will find many  scientific items about this harmful substance).

There is also research which shows that regular, heavy users of marijuana go on to use cocaine. (Journal of Clinical Psychiatry  Kleber, Herbert MD. (Suppl) pp3-6 1988)

The United Nations Convention on the Rights of the Child (CRC) is an important international legal instrument that obligates  Parties to protect children and youth from involvement with illicit drugs and the drug trade.

Under the terms of the convention, governments are required to meet children’s basic needs and help them reach their full potential. (Article 33). Since it was adopted by the United Nations in November 1989, 194 countries have signed up to the UNCRC.

The USA is a signatory to this UN convention and should therefore be passing legislation to prevent the enormous market in marijuana that has developed in America. The more children are exposed to stores that sell these harmful products, the more likely they will be to try them and the more young people will then go on to use cocaine and heroin, to the detriment of the individual and society.

Colorado has failed to meet the specific DOJ requirements on controlling recreational marijuana production, distribution and use. A report documents a significant increase in drugged driving crashes, youth marijuana use, a thriving illegal black market and unabated sales of alcohol, which supports the idea that people are not using marijuana instead of alcohol but rather in addition to alcohol.  Promises were made in Colorado in 2012, before legalized recreational marijuana, that the result would be a large amount in taxes for education and the elimination of the black market. Yet in the years since,Colorado has seen an increase in marijuana related traffic deaths, poison control calls, and emergency room visits. The marijuana black market has increased in Colorado, not decreased. And, numerous Colorado marijuana regulators have been indicted for corruption.

New reports out of Colorado indicate that legal marijuana is posing real risks to the safety of young people. As Colorado rethinks marijuana, the rest of the nation should watch carefully this failing experiment.

A study was done recently a few weeks ago by the Canadian Centre on Substance Abuse and Addiction and it found that just in Canada alone, a much smaller country than the U.S. in population, marijuana-related car crashes cost a billion dollars. That’s just the car crashes, and those were directly related to marijuana. And the report came from a government think tank, not any kind of anti-drug group.

Healthcare officials representing three hospitals in Pueblo, Colorado, issued a statement on April 27 in support of a ballot measure that would end Marijuana commercialization in the city and county of Pueblo. “We continue to see first-hand the increased patient harm caused by retail marijuana, and we want the Pueblo community to understand that the commercialization of marijuana is a significant public health and safety issue,” said Mike Baxter, president and CEO of Parkview Medical Center.

Among their concerns are a 51 percent increase in number of children under 18 being treated in Parkview Medical Center emergency rooms.  Furthermore, of newborn babies at St. Mary-Corwin Hospital, drug tested due to suspected prenatal exposure, nearly half tested positive for marijuana.

Having read the above, how can American legislators possibly believe that legalising marijuana would, in any way, be advantageous for their country?

Big business should never be allowed to profit from the production and sale of goods which are harmful to individuals and society in general.

On behalf of parents in America and worldwide, I am writing to ask that you please consider current legislation and take urgent steps to ensure that the marijuana industry is dismantled to protect American children and the public from the harms which  have now clearly been seen to result from expanded marijuana use in legalized states.

Peter Stoker is Director of National Drug Prevention Alliance (UK)  and  a Member, The The International Task Force on Strategic Drug Policy