“What has been the result?   We saw drug purity and availability go up and drug prices go down.  We saw addiction and death spread like never before.”

Attorney General Sessions correctly drew a causal connection between the rise in overdose deaths and drug liberalization movements.  He spoke at the Drug Enforcement Administration’s graduation ceremony for its agents last Friday.   Graduates must have been encouraged when he said: “So I wanted to be here today to state loudly and clearly: this Department of Justice supports you.  We believe in you and the importance – the morality-of your mission.”  See entire opioid epidemic speech on DOJ website.

Addiction is a “contemporary version of slavery.  It destroys autonomy and free will, a foreseeable outcome of using chemicals that artificially suppress and supplant natural brain reward systems.” (Pontifical Academy of Sciences report on drugs, November 2016) 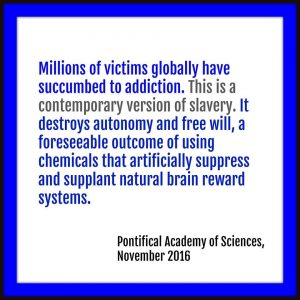 In 2009, the Department of Justice issued the Ogden Memo which led to the expansion of medical marijuana. The Cole Memo went even further in hindering enforcement of federal law in states with medical marijuana, in 2013.

It’s no coincidence that drug deaths rose and began to rise more steeply after 2014, when the government began to ignore violations of federal marijuana law.  Drug deaths cross all racial, ethnic and economic groups.  The rate of drug overdose deaths is twice the rate of death by gun violence.

In 2014, Congress prevented funding for enforcement of violations of federal marijuana law, in response to a well-funded and misleading lobbying campaign by the marijuana industry.

Why Jeff Sessions Needs our Support

However, numerous studies show how marijuana use has everything to do with the rise in drug overdose deaths.

Furthermore, the Press reports of widespread contamination in marijuana products sold to sick people.  Claims for marijuana as a medicine lack scientific evidence.

Congress continued to defund the prosecution of marijuana violations for the past three years.  The states have not been able to manage the problems, and, thus, federal oversight is needed.

We hope that any budget deal will include funding for the Department of Justice, the FDA and DEA to fight marijuana violations. Jeff Sessions needs our support in the next budget deal due on February 8.  We must assure that Congress provides funding to go after violations of federal law.

Giving up the fight against drugs and legalizing marijuana contributes to the increase in overdose deaths. The Drug Policy Alliance continues to blame the “War on Drugs” for our nation’s problems, and the youth of today believe that drugs are ok.

DPA argues that disparity in arrest rates between minorities and whites is a reason to legalize pot and other drugs.  After legalization, marijuana arrest rates go down but the disparity remains.  A complex problem like racial inequality was never going to be solved by legalizing marijuana. Mass incarceration is about way more than the war on drugs.

The DPA website attempts to lessen the perception of harm caused by drug use, while promoting its agenda. One of their podcasts claims that 90% of drug use is non-problematic.

DPA wants harm reduction to be the focus of policy, rather than prevention.  The US and Canada have more than 50% of the world’s illicit drug users. Giving up on demand reduction and prevention is a reason so many people are dying.  We need to prevent the onset of drug use.