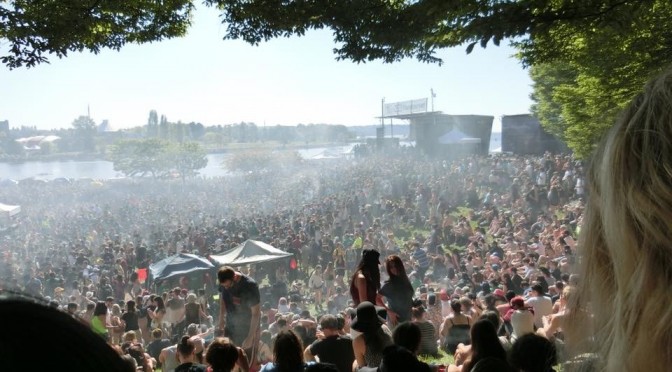 This testimony was submitted by SM in British Columbia.  Photo above is from the Facebook page of Sunset Beach Vancouver. It was from the  420 event in Vancouver, BC, Canada, on April 20, 2016.

Proud to serve as Minister of Youth, I hope you will take my suggestions into consideration. I stopped going for walks by the beach with my kids because of the pot smell and second-hand exposure. At the moment we have law prohibiting smoking in the public areas. Once I asked a park ranger why he does not fine a pot consumer on the beach. He answered to me that this pot consumer does it for a medical reason. What does it matter if it is for a medical reason or not? I don’t want to be exposed to the second-hand smoke! It is also questionable who and how you can get permit for medical marijuana use.

Pot should be treated in public area the same way liquor consumption is, but even more strictly because of second-hand exposure. I want to point out the difference between smoking a pot cigarette versus cigarette and alcohol use. You can drive a car if you smoke cigarettes without any safety issue to the traffic, but not if you are under influence of the pot or alcohol.  Second-hand exposure to the pot smoke is far more dangerous than cigarette exposure because it has an influence on the brain. Young peoples brain under development is specially vulnerable to the pot second-hand pot exposure!

How is the government is going to control selling of cookies or any other food product with pot in its ingredients? Are our kids going to be safe or can any pot candy manufacturer manipulate them?

What about the smell?  What about second-hand smoke exposure?  What about impaired driving?  What if I have a neighbor who consumes pot and I can’t open my window? Pot users must be kept away from public.  If it’s medical, make it be used in designated clinics where they can consume with no influence and exposure to the public. This all needs to be regulated by law.

How much is it going to cost this government to care for a stoned generation? Are we going to be allowed to go to work stoned?

We took away cigarettes from our streets but now we allow pot. Pot needs to be regulated by a law far stricter than cigarettes, somewhere in between alcohol use and drug use.

Where’s the consideration for the public safety?