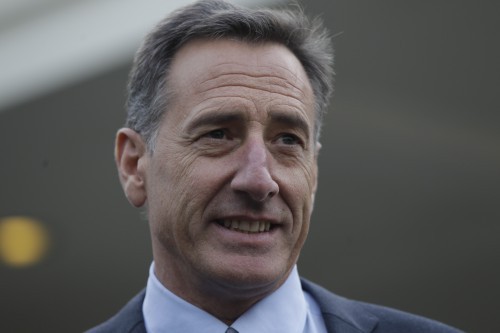 by Randy Philbrick, Smart Approaches to Marijuana Oregon, originally published on the website.    Gov. Shumlin’s State of the State address was January 7, 2016.  This story is unrelated to our previous critique of the Vermont state legislature.

Governor Peter Shumlin of Vermont gave a very good State of the State speech. He talked about how he plans to help create more jobs, help bring Vermont a greener environment and get more kids to college. Then his speech took a dramatic turn down a very steep embankment to its death.

Governor Shumlin addressed the opiate addiction problem as all other states are having. He said that we need to fix this problem, as we should.  His speech was good and then…..BAM, Marijuana legalization. The Governor talked about how he plans to get right what other states couldn’t get right. Then he laid out a 5-point plan for success.

“First, a legal market must keep marijuana and other drugs out of the hands of underage kids. The current system doesn’t. Our new system must.

· Second, the tax imposed must be low enough to wipe out the black market and get rid of the illegal drug dealers.

· Third, revenue from legalization must be used to expand addiction prevention programs.

· Fourth, we must strengthen law enforcement’s capacity to improve our response to impaired drivers under the influence of Marijuana who are already on Vermont’s roads.

· Fifth, take a hard lesson learned from other states and ban the sale of edibles until other states figure out how to do it right.”

The very first step he points out is doomed to fail. Would you like to know why Colorado, Oregon, Washington State and Washington DC are leading the nation in teen use? Legalization, that’s why. How many times can we say this, legalization comes from normalization. Both of which tell our children that doing drugs is ok.

Peer pressure is the main reason most kids started using tobacco. Using phrases like “How bad can it be? Everybody is doing it” or “You want to be part of the cool kids don’t you?” These phrases come from normalization. Drug use in the home while the kids are there also leads to normalization. Well Mom and Dad do it so it must be ok right? Wrong. The science is clear. Marijuana use is detrimental to the developing brain.

And yes legalization does lead to more teens using. So now that you’ve normalized marijuana you want to legalize it. You want to add easy access to the drug. Legalizers will tell you that regulation keeps marijuana out of the hands of kids because dispensaries will card everyone.  Seven dispensaries in Denver were fined this past fall for selling to underage kids. But that’s not how most kids are getting it. Remember the days of asking adults to go in to the store and buy you liquor or cigarettes? Or stealing them from your parents when they weren’t home?

Next he proposed implementing a tax so low it wipes out the black market drug dealers. Well, Governor, that would be zero tax. Any tax will keep them going to the cheaper deal. And if you don’t tax what’s the use in legalization?

His third point is a revolving door. You want to legalize an addictive substance to pay for addiction treatment. Seem counter productive doesn’t it?

The fourth and fifth are the two that make the most sense out of the five. However take out the part that says “Until other states figure out how to do it right.” There is no right way to sell edibles.

Hopefully our friends with SAM Vermont can get to the Governor and talk some sense into him because he’s obviously not thinking clearly on this issue.    (Here’s the text to Governor Shumlin’s State of of the State address. )