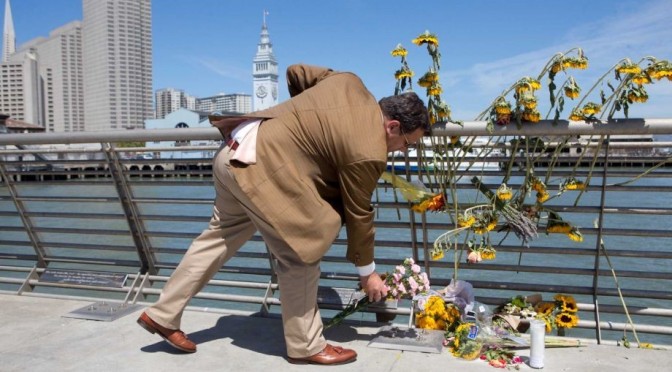 At the urging of California Attorney General Kamala Harris, Californians voted in favor for Proposition 47 in 2014, designed to reduce penalties for criminals, particularly drug criminals. Ironically, Proposition 47 was called The Safe Neighborhoods and Schools Act. Americans need to wake up to misleading names crafted by clever politicians. The deceptive name covered up the intent of the law. The ACLU, The Open Society Policy Center, Drug Policy Alliance and individual donors spent over $10,000,000 to pass Proposition 47.

Mayor Lee has asked for federal and local agencies to review what happened. The conflict between state law, federal immigration policy and city law allowed Sanchez to live freely in San Francisco.

Parents Opposed to Pot objects to allowing a convicted felon and drug offender on the streets where he could randomly kill a young woman. We are less concerned about his status as a resident, a legal immigrant or illegal immigrant. It is about applying justice when there is a good chance a repeat offender will commit more crimes.

Sanchez had been deported five times. He uses many aliases. California needs to apply appropriate justice against drug crime, which can be more effective than deportation!

Piecing together the News Reports

On March 26, U.S. Immigration and Customs Enforcement officers turned 45-year-old Francisco Sanchez over to San Francisco police on an outstanding drug warrant (selling marijuana) and requested that they be notified before his release, so federal officers could take him into custody and deport him. Sanchez was brought to court March 27, where his drug charge was dropped.

Sheriff’s deputies released Sanchez April 15 without notifying immigration authorities, according to Virginia Kice, a spokeswoman for U.S. Immigration and Customs Enforcement. “This individual was a public safety risk and exemplifies the kind of individual that ICE wants to identify and process for removal,” said former ICE Director Julie Myers Wood, who now runs a private investigation and security firm.

Kate Steinle, a 32-year-old, was gunned down during an evening stroll on Pier 14 with her father and a family friend. She had recently moved to San Francisco. It was about 6:30 p.m.  The shooting appears to have been random. Sanchez immediately fled, but was arrested about a mile south of Pier 14.

Sanchez told police he was shooting at a sea lion when Steinle was hit and tossed the gun into the bay. (Such delusions are typical of marijuana-induced psychosis) On Thursday, police divers scoured the waters beneath the pier on Thursday and found the gun believed to be the weapon.  In the latest twist, it turns out that the gun belonged to a federal agent.

Kate Steinle’s death should be a warning to other states not to fall into the trap of Proposition 47, propositions with a hidden agenda to legalize drugs. Since about 80% of all crimes are committed by drug users, our children and families cannot be safe if these policies are introduced.