Our criminal justice system is under fire.  The lack of adequate mental health care is in the news.  The mistreatment of the mentally ill who are incarcerated is also coming under scrutiny. Prevention through a comprehensive school drug education program in the United States could greatly diminish all three of these problems.

The United States has less than 5% of the world’s population but more than 60% of the illicit drug users in the world.  It is a tragedy of epic proportions that people simply have not been educated about how today’s high-powered marijuana can cause hallucinations, psychosis, depression and mood disorders.  The new bill, Helping Families in Mental Health Crisis Act, is an opportunity to advocate for more psychiatrists to get board certified in Addiction Psychiatry and Addiction Treatment. 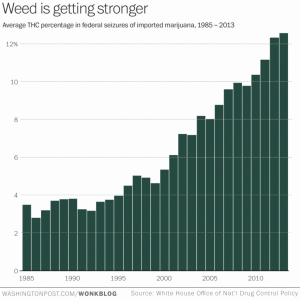 Supporters of Parents Opposed to Pot have undertaken a search for biographies that focus on individual stories of chronic psychosis.  The effort is just underway, yet three out of three of the books we ordered turned out to have subjects whose psychosis followed heavy marijuana use and whose tragic life stories have been compiled by a parent. They are: Brain Gone Wild: a tale of electrodes, schizophrenia and John,” by Polly deButts;  Ben Behind His Voices by Randye Kaye and now Mind on the Run: a Bipolar Chronicle, by Dottie Pacharis.  In their writing, the authors themselves don’t delve into why the connection to marijuana use might be there, and indeed that possibility is not why they decided to publish their stories.  Yet all three cases fit a similar pattern of bright young men whose futures are dashed, their mental illness associated with this risk factor they were unaware of and could have avoided had they known. The portrayals of the ravages of psychosis on these individuals and their families are riveting and sad.

Though an endless number of studies have shown the link of marijuana followed by psychosis, many psychiatrists have chosen to ignore the evidence. Or they have rationalized by saying drug abuse unmasks the underlying mental health disorders. Professor Robin Murray’s study published in the Lancet Journal of Psychiatry earlier this year puts the nail on the coffin of the theory that self-medication in these cases is a coverup for mental illness. * (His article confirms our observations and other articles that found marijuana to be an environmental trigger for psychosis. It also can precipitate manic symptoms. )

A long-term study out of Australia and New Zealand was published last September. It showed that teens who used marijuana were 7x more likely to attempt suicide.   We are tying to cut down on suicide in the U.S., and cutting down on marijuana use would be a first step. Reducing suicide is also a goal of H.R. 2646, called The Helping Families in Mental Health Crisis Act.

How the Problems Unfold

Looking at the tragedy of Keaton Farris, a 25-year old who recently died of dehydration in jail, prompts questions about the role of marijuana in his downfall. His mistreatment and death are shameful and inexcusable. But it happened in Washington, a state whose residents seem to accept the false notion of weed as harmless. ** Two years earlier, Farris had been diagnosed with bipolar and given medications that seemed to help.  His story is typical of the young people who indulge in marijuana and other drugs, end up with a mental illness, followed by a time in jail.  Our readers have reported  similar cases to us over and over again.

Too often, the episodes that precipitate mental health emergencies are the result of marijuana use.  Insult is added to injury when mental health professionals use flawed treatments.  Failure in our mental health care delivery could be avoided if psychiatrists did not give powerful anti-psychotics to patients in the midst of marijuana-induced psychosis.  Parents Opposed to Pot advocates for a holistic approach to mental health care treatment in which addiction and substance-abuse disorder are addressed before any secondary diagnosis and treatment are given. First give the brain a chance to heal.  In other words, a child whose brain is altered by substance abuse should not immediately be treated with other powerful, brain-altering drugs. The key is not to rush to diagnose a young person until  “drugs of abuse” are out of the picture.

H.R. 2646, Helping Families in Mental Health Crisis Act, would alter aspects of HIPAA privacy which prevent family from getting information that could help or save their loved ones. Creigh Deeds supports parent access to diagnosis of an adult child, which is one reason he is backing the bill. His son, Gus Deeds became psychotic, stabbed his father and shot himself, after being given a Court order for mental health placement but finding that a in-state hospital bed was unavailable.  Deeds and Murphy explained H.R. 2646 on CNN.   Congresswoman Johnson previously highlighted how HIPAA privacy laws have prevented families from involvement in mental health care.

Countries, such as Sweden, that recognize the need for anti-drug education early and often, have greatly diminished the number of children, teens and citizens using marijuana and other drugs.   Canada has put up a website for its youth, to address the issue of cannabis-psychosis.  What is taking the U.S. so long?

Unfortunately, the Drug Policy Alliance and ACLU and other groups characterize education against drug usage in the schools as “scare tactics.”  We will never get a grip on our mental health problems if we don’t get a grip on our problem with marijuana. Especially, the kids who are doing ‘dabs’  and ‘wax,’ are in imminent danger.  ‘Dabbing’ is exploding onto the drug-use scene.

Any comprehensive revision of mental health care  standards must address the role of substance abuse as a causative factor in mental illness.  Parents Opposed to Pot represents many parents whose children have faced a mental health crisis and found out that pot use either caused or added to the problem.  Too often the substance abuse that precedes the crisis and the presence of THC in the toxicology reports are not factored into treatment.

From our observations, all mental health needs could be reduced by one-third to one-half if we eliminated the use of marijuana by those under age 25. ***

There are those who can use marijuana regularly and never become mentally ill or psychotic, just as there are life-long cigarette smokers who never get lung cancer. However, we don’t have ways to identify who is susceptible to marijuana-induced psychosis.

* A study multi-year study published in February 2015 showed that one quarter of all new psychosis incidents in South London were triggered by marijuana usage.  Dr. Robin Murray, one of the co-authors, said that his study definitively established skunk-marijuana as a causal factor in psychosis which can lead to schizophrenia.

*** The rate of marijuana usage is significantly higher in the US and Canada than in Great Britain and other countries.  Higher pot use is part of the reason we believe mental health care needs would be reduced to a greater extent in America with more drug education in schools and public service announcements.